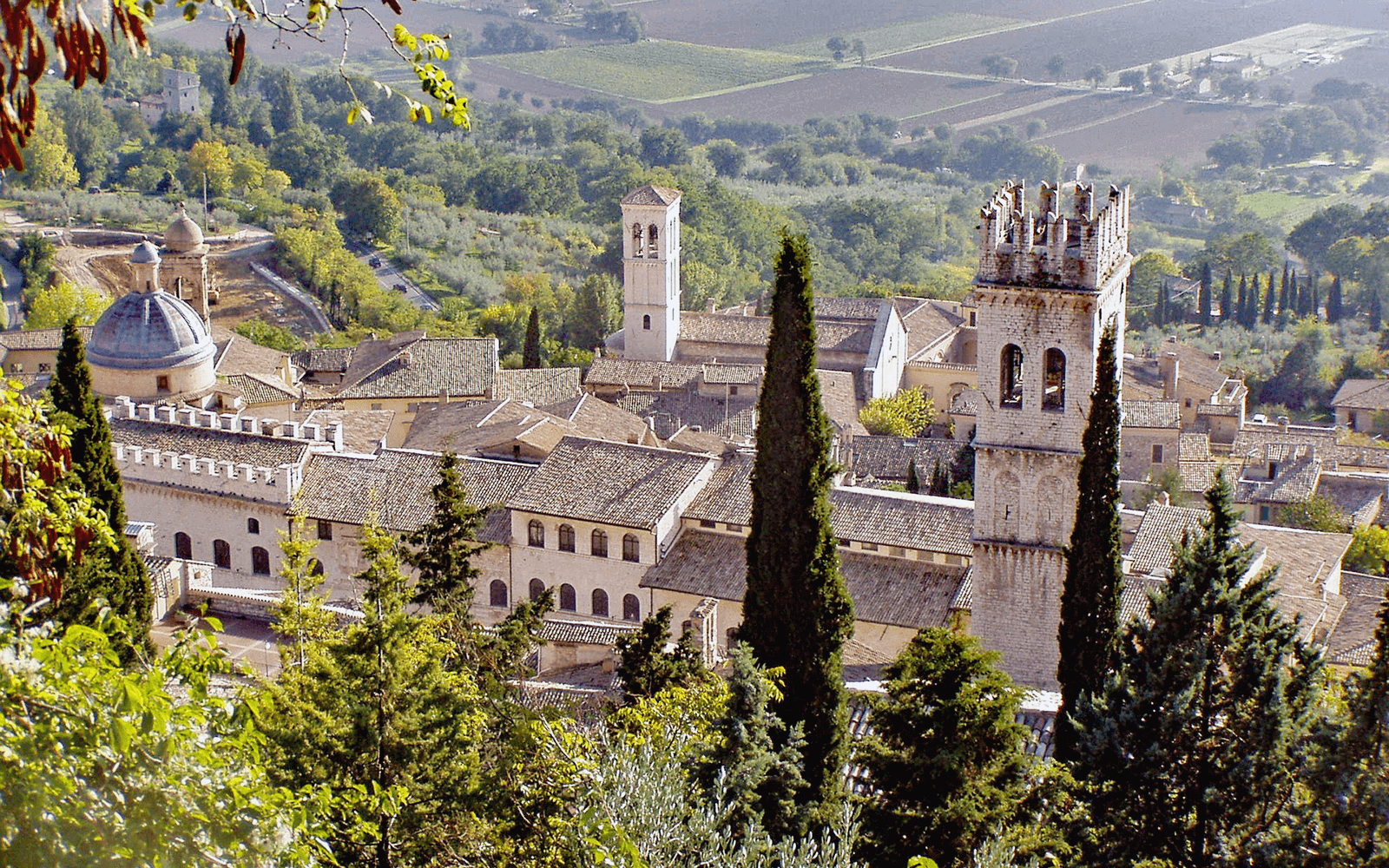 The 7 Most Charming Towns in Tuscany & Umbria

Looming large over the horizon, Tuscany and Umbria’s magnificent towns showcase some of Italy’s most beautiful landscapes. Velvety green hills undulate with winding roads lined with cypress trees, expanses of fields (perhaps filled with sunflowers at one turn, or a sea of wheat at the next bend).

While many travellers know Tuscany for its cinematic fame and for the aforementioned visuals, less know its neighbouring region, Umbria. Famous for the ‘liquid gold’ of its fertile soils, which grow some of Italy’s finest olives from which oil is produced, this landlocked central region reveals its well-preserved charms from ages of empires and medieval city-states past. Here are some of our favourites. (And I haven’t even gotten started about the wine!) Follow the ancient Via Flaminia, the Roman road which connected many of these towns; long before Italy was unified, rival city-states jockeyed over influence and power, often building fortified towns on elevated hills, hoping to escape the powers that be (popes or emperors, warring dukedoms, and the like).

Originally an Etruscan settlement, this well-preserved medieval Umbrian town has kept its narrow streets and towers unaltered for well over five centuries, and was the home of Saint Francis, patron saint of Italy. Naturally, its show-stopping attraction is the gargantuan two-level Basilica of St. Francis, consecrated in 1253 and still a stop for pilgrims around the world. The frescoes portray the life of the saint, and his remains are consecrated in the crypt here. Also worth checking out is the ancient Temple of Minerva, built way back in the 1stC by Romans.

Inhabited since the Bronze Age, this ancient Italian town is a bit hard to get to, but its sleepy charms and customs open a window to a different way of life. Of note is the folkloric tradition of the Corsa dei Ceri, which is a feast of saints and one of the biggest festivals in Umbria, held every 15th of May. Three neighbourhoods in the city dress in the traditional colours of their saint—yellow for Saint Ubaldo, blue for Saint Giorgio, and black for Saint Antonio—and three local teams will race each other, with ten men each carrying 600-pound wooden relics five metres (16 feet) high, throughout the town, ending in the Basilica of Saint Ubaldo. The town square is packed with visitors, all eagerly anticipating the annual outcome.

A lovely little Tuscan town and the birthplace of Leonardo da Vinci (literally, ‘Leonardo from Vinci’), this hill town features a museum dedicated to its most famous son, as well as a backdrop of gentle hills, olive groves, vineyards, and quintessential Tuscan scenery.

This small town in Umbria is set on a high plain amongst the Apennines, it’s known for its lovely air, and famous for boar hunting (and its byproducts, sausages and ham—known as nocineria), walnuts and truffles. A functioning Benedictine monastery is also located here; sadly, the Basilica of the St. Benedict church was destroyed by a 2016 earthquake; the town is still rebuilding.

Sitting pretty atop high hills, framed by the Apennine mountains, and along the Via Flaminia, this settlement was founded as a colony by the Romans, whose distinctive arches, bridges and amphitheatre remain. It changed hands to the Lombard dukes, who made it their capital, and is also the final resting place of Fra Filippo Lippi, one of the Renaissance era’s most talented painters; a notorious womanizer who seduced a nun (Lucrezia Buti, whose likeness informs his madonnas and other female figures in his art), fathered several children out of wedlock with her, and refused to return her to the nunnery.

A hilly, walled town which has seen history change hands from the Etruscans, Romans, and other dynasties, it’s of particular interest thanks to its alabaster deposits in the nearby hills, and centuries of fine craftsmanship. The luminous white stone, ideal for carving, was used by Etruscans for funerary urns, sculptures, statues and lamps.

A wonderful town in Tuscany renowned for their Brunello di Montalcino wine, as well as for their ‘lesser’ wine, Rosso di Montalcino, it’s a picturesque locale to drink to your heart’s content. Another place worth visiting in the area is the Abbey of Sant’Antimo, about a 10-kilometre walk away.  Once abandoned but now occupied by monks, you may be able to hear them singing devotionals and vespers on your visit!

Back to The Slow Road Blog
Photography credit: Corsa dei Ceri by Greg Schecter via Flickr