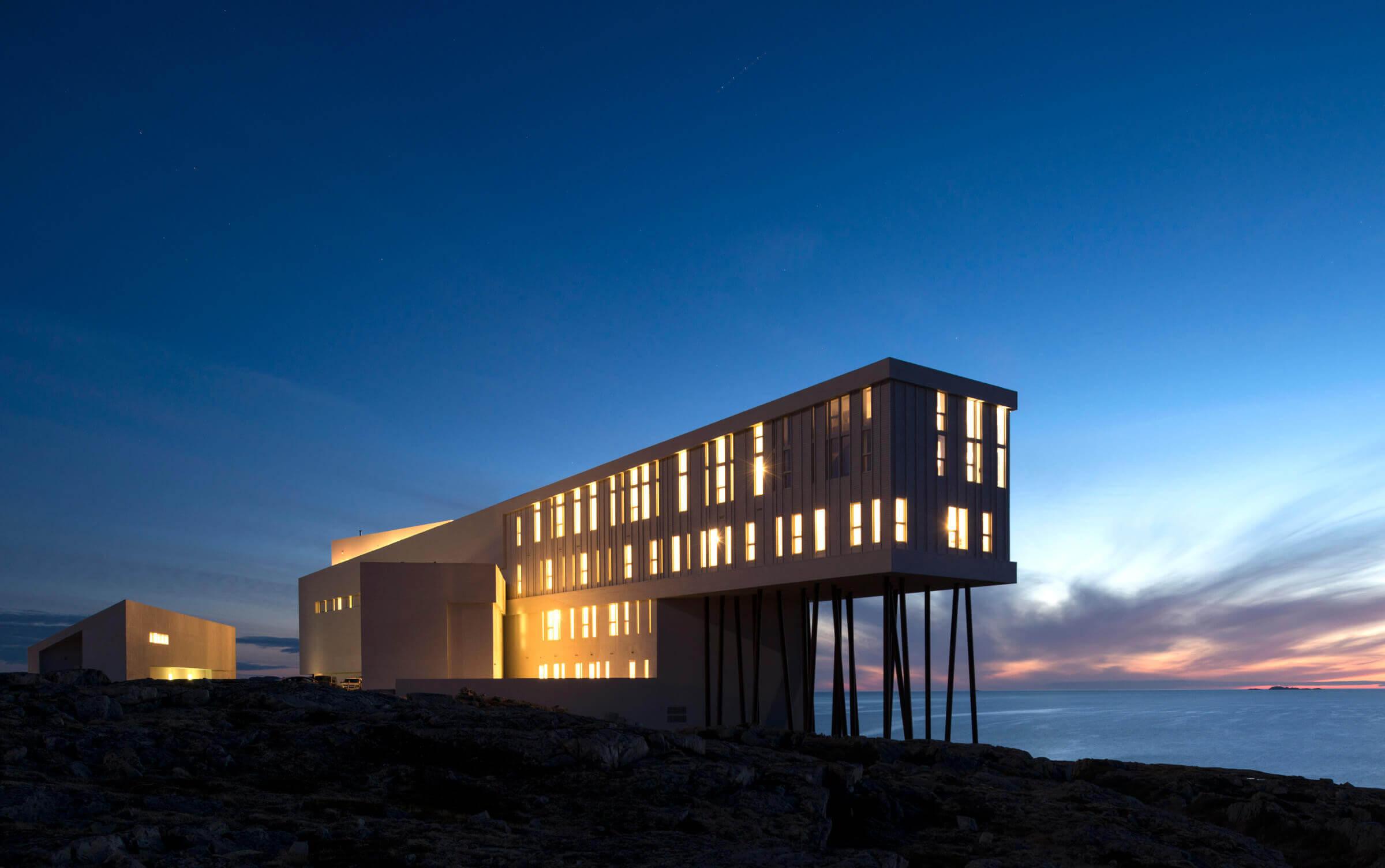 When Zita Cobb went back to Fogo, the tiny island of her birth just off the coast of Newfoundland, she returned with not just an executive pedigree, but a vision. With the official opening of the Fogo Island Inn, the landmark hotel that’s become the jewel of the island, her vision has come to fruition. We caught up with Zita to talk about the hotel, the island’s spirit, and the feeling people get when they visit.

A Q&A with Zita Cobb

The Slow Road: With the Fogo Island Inn you’ve not only entered the hotel business, but you’ve created an entity that’s as unique as the island. We know the project grew out of your broader work with the Shorefast Foundation, but can you give us a sense of how the Inn came about? Why build a hotel on Fogo?

Zita: Fogo Islanders – maybe because of their very ‘islandness’ – are genetically and culturally disposed to profound, embodied hospitality. Since the goal of the Shorefast initiatives is to contribute to cultural and economic resilience for the island, an inn just seemed like such an obvious thing to do.

And also, Fogo Island is such a singular place with such a singular culture; it has an immense amount to offer guests to the island. Of course the elemental power of the natural place is sacred – and the culture that has emerged from centuries of making a living there has much to tell about our common humanity and our place in the family of things.

So for Fogo Islanders the Inn is a vessel to hold our stories, to tell what we know – while at the same time adding another leg to our fishing economy. For our guests it offers a refuge from the madding world, a retreat to the harmonizing magic of the north Atlantic, and if they want to engage (and not all do!) a chance to be in conversation with a people who have a different way of knowing, to learn from each other…to feel our common humanity.

One of the inn’s goals is to make connections between guests and the local island community. What are some of the ways this is done?

This is both very very difficult and very very easy. We discovered that the key is to do as little as possible, to let things emerge between people. As I mentioned, the hospitality on Fogo Island is embodied and natural—not contrived or layered on. So we created what we call a community host program. Community hosts are ordinary men and women – fishers, artisans, homemakers, teachers – who have a passion and deep knowledge for their island home and are enthusiastic about welcoming guests and sharing what they know. Once people meet, things unfold as they should between a specific host and specific guest—naturally. In addition, we have created some venues (eg. the Wind and Waves Artisan’s Guild) and some programs (eg. a Culture of the Cod Excursion to Little Fogo Islands) that offer frames for exploration and immersion.

Now that the inn has opened, what’s been the most surprising thing about the process/experience of building it?

We made the decision early on that wherever possible, the objects inside the inn (beds, chairs, tables, textiles, etc.) would be made by hand on the island. We also decided to invite professional designers from away to come work in collaboration with our local artisans – boat builders and textile people – to create contemporary forms that are derived from the old. This has been the most incredible journey through old cupboards, sheds, through stories and conversations and questions and debates about who we are, what is our cultural identity, and ultimately, what matters. The attention to each and every thread, each and every board, has been a kind of healing and restorative devotion, reminding us who we are and at the same time creating some lovely objects that have the potential to form the basis of a continuing cottage industry of care, craft and culture.

Obviously the architect who designed the property, Todd Saunders, is a fellow Newfoundlander, but what else about Todd and his work appealed to you when you were considering architects for the project? How important was his Newfoundland heritage?

The design brief for the Inn was simple: to find a way to take our way of knowing and express it in a contemporary form… to create what our ancestors might have created if they were here now. It was a long study in the soul and spirit of our built heritage. As a Newfoundlander, Todd wasn’t starting from zero, so he had a natural advantage. He also has in his work – and in his person – an acute sensitivity to place. This is exactly what we needed. Our projects optimize for place and people.

Todd also happens to be one of the best young architects practising today—anywhere. And no doubt his time in Norway has helped hone his skill at expressing a lot in the smallest of gestures and an understanding that as much is said by restraint as by exuberance. And besides, the culture has so much exuberance in it, the building needed to be quieter! His work gave us the vessel we needed for our intellectual heritage – and a space to gather and grow as modern people.

Finally, what impression or emotion do you want guests of the inn—and the island—to leave with?

We hope that our guests leave (if they must) quieter in their hearts and clearer in their minds  about what is important to them. And we hope they feel that they have been part of meaningful conversations and that they take away a lasting feeling of the wind on their face and the salt air in their souls.

And for sure we hope they take away a stronger belief in the intrinsic value of place, of rural people, and see the possibility that perhaps a part of the answer to the question, “How we can better live together on the planet?” might come from the periphery—from people who see differently.