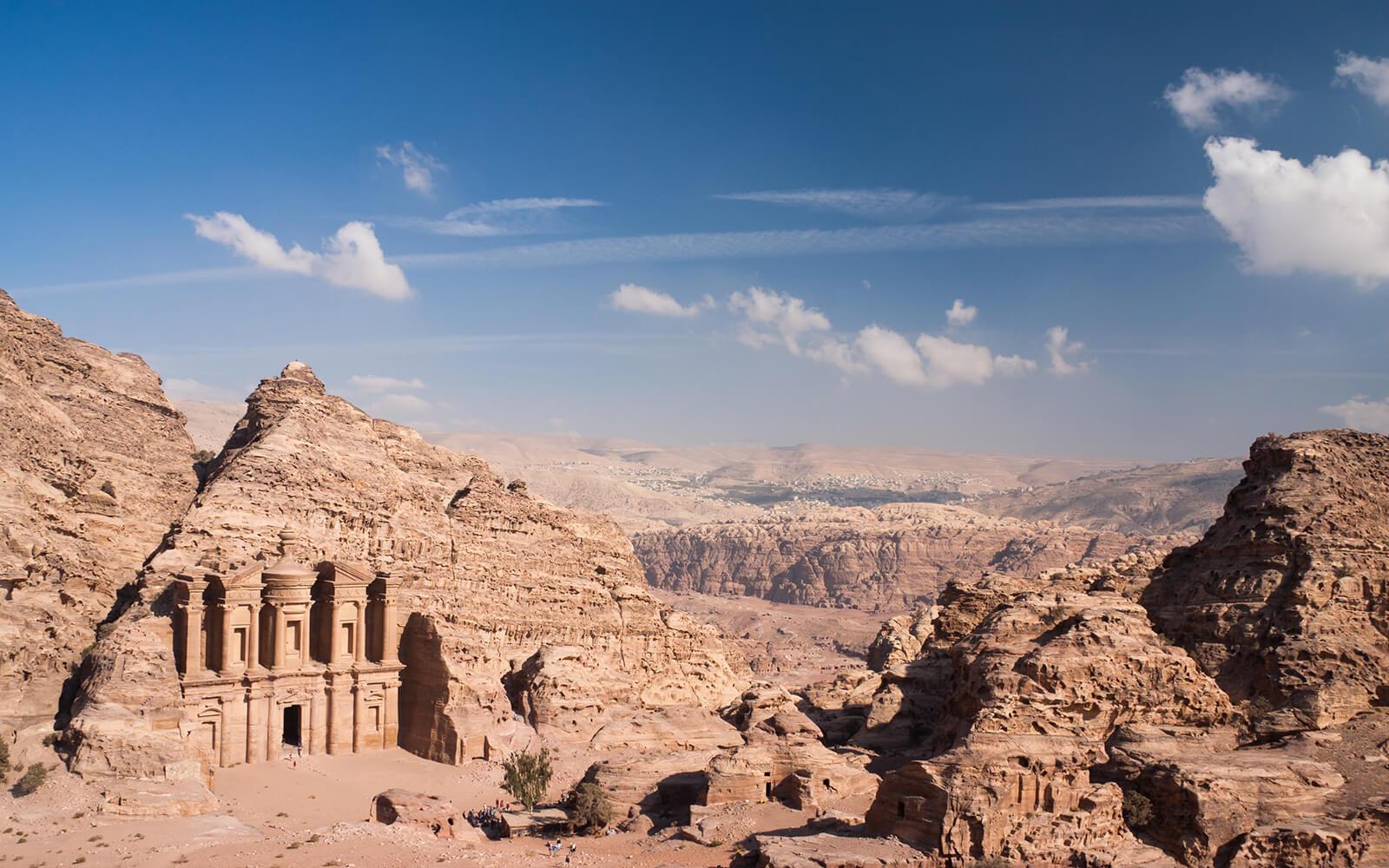 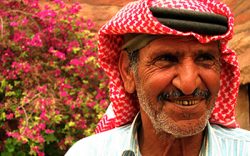 Ahlan wa Sahlan: welcome to Jordan! Part of the Holy Land, this is a place where crusaders, desert nomads and dreamers have wandered. Anyone travelling to this tiny kingdom, about the size of the U.S. state of Indiana, has much to look forward to. The great thing about the size of the country is that everything is easily accessible and within a relatively short distance, so you can pack a lot into a trip. Here’s a look at some of the cultures and people that have shaped Jordan, along with the iconic sights that travellers flock to. (And they’re truly spectacular: Jordan is a real stunner of a country). 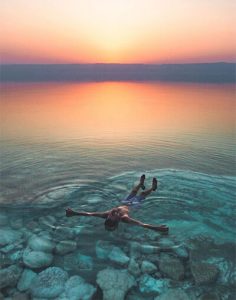 Salty and sublime, the Dead Sea is the world’s deepest hypersaline lake, and the earth’s lowest elevation on land along the shore, sitting 430 metres (1,412 feet) below sea level, with the Jordan River being the only major water source flowing into the Dead Sea. Geologically speaking, the Dead Sea is a continuation of the Great Rift valley that begins in Tanzania. Even during the time of King Herod, the Dead Sea was used as a wellness centre and resort.  The high mineral content of the Dead Sea makes it suitable for all kinds of health treatments, and its low elevation allows for increased atmospheric oxygen and pressure, believed to be beneficial for aching joints. Grab a newspaper, float on the water’s surface, and take that photo op!

Simply put, the ‘Rose City’ of Petra is spectacular—described by UNESCO as “one of the most precious cultural properties of [humankind’s] cultural heritage.” The incredible rock-cut tombs, the beautiful temples, the treasury buildings—and Petra’s many other stunning features—combine to make the site unique in the world. The country’s most-visited tourist attraction and its national symbol, it receives about 600,000 visitors each year.

Originally known as Raqmu to its first inhabitants, it supported up to 20,000 people within its enclosures at its peak, during the 1stC. Petra did not begin as a Nabatean capital, but it was under the Nabateans that it acquired its height of magnificence. First believed to have been settled as early as 9,000 BCE, the first mention of the Nabateans at Petra dates from the Hellenistic period.

The ruins at Petra are carved directly out of the canyon’s red ochre sandstone, and they represent many influences. The step pyramid designs are reminiscent of Mesopotamian ziggurats; the square facades of the tombs and obelisks are Egyptian in style and the many public buildings show both Roman and Hellenistic influence. No photo will capture that rosy red glow of the sandstone, so take it all in when you arrive.

The way into Petra is through the Siq, a narrow, mile-long gorge formed by tectonic activity and gradually worn smooth by water (although these days the water is diverted for safety reasons). An arch, which collapsed in the 19th century, once framed the entrance to the Siq.

The remains at Petra mostly date from 200 BC to 200 CE, when the Nabatean kingdom was at its peak. The early morning and late afternoon are the best times to enjoy the beauty and wonder of this enchanted place, and if you are here on the solstice, you will see some of the key buildings illuminated perfectly, just the way the Nabateans designed it.

The crowning achievement of the temple ruins at Petra, this magnificent, elaborate structure is believed to be the mausoleum of the Nabatean King Aretas IV. Its name derives from the Bedouin, who believed this building contained fantastic treasures. Greek architects were consulted for its design; you’ll see the remnants of Hellenistic architectural details, including statues of the twins Castor and Pollux, Amazons on the upper-level dancing with double-edged axes, and other sculptures which have since eroded, mythical beings associated with the afterlife.

The walk to the Monastery is an 800-step trail, but utterly worth the effort. The second-most visited structure in the Petra complex, ‘The Monastery’ is a massive 50-metre-wide (160 feet) rock building that highlights more of the achievements of the Nabateans. It was dedicated to Obodas I, the King of the Nabateans from 96 to 85 BCE. A military commander who defeated both the Hasmoneans and the Greeks (using camel cavalry) in two separate battles, the Nabateans began to worship Obodas I as a god.

Another archaeological site worth visiting is the Nabatean site of ‘Little Petra’, also known as Siq al-Barid or Beidha. It is located about 8 kilometres (5 miles) north of Petra and Wadi Musa. With buildings carved into the sandstone, but on a smaller scope than at Petra, this is another opportunity to view the achievements of the Nabateans. It is considered part of the Petra Archaeological Park but is accessed separately, and unlike Petra, is a free attraction. Many archaeologists believe it is a suburb of Petra, and likely was built during the same time, around the 1stC. On-site, you will find some 2,000-year-old Hellenistic frescoes recently discovered and restored, a magnificent example of large-scale painting from this period.

Beidha is similarly inscribed in the UNESCO World Heritage Site of Petra, located a few kilometres north of it. First excavated in 1957, there are three stages of human habitation at this archaeological site: the first from the 11th millennium BCE, the second stage dating to the 7th millennium BCE, and a Nabatean period of habitation in the 1st or 2nd century BCE. At the height of its habitation, about 125 to 235 people lived here. It seems to have been a seasonal encampment that was repeatedly occupied, with most inhabitants partaking of hunting activities here.

We have the Nabateans to thank for the incredible beauty of Petra. A force to be reckoned with from the 7thC through the Hellenistic period and into the later Roman Empire, they are considered “one of the most gifted peoples of the ancient world” by writer Jane Taylor.

The nomadic Nabateans originally came from the Arabian Peninsula. When the kingdoms of the Middle East became pawns of various ancient superpowers (during the Hellenistic and Roman period), the Nabateans remained an independent kingdom in the desert, controlling lucrative trade routes between the Seleucids (Greeks) in Syria, the Ptolemys in Egypt, and the Parthian-controlled ports of the Red Sea. This trade brought luxury items from the Far East and Arabian Peninsula into the hugely prosperous Middle East and Mediterranean regions.

When Roman Emperor Trajan defeated the Parthians in a series of battles between 115-117 AD, after which the Roman province of Arabia was formed, and the Nabateans became part of the diverse fabric of the Roman Empire. The Nabateans’ influence and wealth declined as the Romans gradually moved their focus of trade north.

The stunning desert landscape of Wadi Rum was made famous by the Oscar-winning film, Lawrence of Arabia. In Arabic, Wadi Rum means “the Valley of the Moon” and indeed, the landscape here feels distinctly lunar. The Wadi is a part of a sequence of parallel faults that run north/south through the Shara Mountains. The mountains themselves are comprised of granite, basalt and sandstone massifs rising 800 metres (2,400 feet) off the desert floor. The erosion of wind and sand gives these mountains the most extraordinary texture, prompting T.E. Lawrence to once describe the Wadi as “vast, echoing and godlike.”

The desert is not uninhabitable. Oases have allowed the Bedouin to survive here for centuries. The Nabateans built a temple here, and there are many rock carvings and inscriptions that date back to the early first millennium AD, indicating a thriving cultural presence despite a harsh environment.

Other Key Sites in Wadi Rum

The peak of Jebel Rum is on the western edge of Wadi Rum, rising to 1,734 metres (5,689 feet) is the second-highest in the country, and a popular spot for hikers, scramblers and climbers who attempt to make their way to the summit (a guide is required). Another landmark is the ‘Seven Pillars of Wisdom’ (also known as Jabal al-Mazmar to local Bedouins), a rippled rock formation that evokes the book of the same name by T.E. Lawrence.

Jordan’s largest nature reserve was established in 1989 with 308 square kilometres (119 square miles) of land. It is named after a crumbling little town set atop mountains and wadis that extend from the top of the Jordan Rift Valley to the desert lowlands of Wadi Araba. The native inhabitants are the people of the Ata’ta/Al-Atata tribe, who have lived in the region for more than 6,000 years. Other evidence indicates that Paleolithic, Egyptian, Nabatean and Roman settlements have also established themselves here throughout history.

The plant life here is the most diverse in the country, notably the most southerly place in the world where you can find the Mediterranean cypress, along with three endemic plant species. Some endangered animals that make their home here are the Nubian ibex, Syrian serin (a bird from the finch family), caracal and lesser kestrel.

The desert of Wadi Araba lies south of the Dead Sea basin, northwest of Petra, and adjacent to Wadi Rum. Virtually free of rainfall, you will still find many specialized plants and animals who make their home in this harsh region, characterized by colourful cliffs and typical desert landscapes. During Biblical times, it is believed that King Solomon established some of the oldest copper mines in the world here.

A name for the nomadic Arab peoples who have traditionally inhabited the deserts of Northern Africa, the Arabian Peninsula, Iraq and the Levant, the English word ‘bedouin’ comes from the Arab term badawī, meaning ‘desert dweller’.

Observing a clan structure and the traditional practice of herding camels or goats, many of today’s Bedouin are urbanized and live and work in the city. However, there are many cultural festivals in which Bedouin come together to share in traditions such as traditional dance, music, poetry recitation, and the old ways. The traditions of desert camping and camel riding.

Most of Jordan’s Bedouin people arrived in present-day Jordan between the 14th and 18th centuries. Today, Bedouin make up to 40 percent of the population of Jordan, often referred to as the ‘backbone of the Kingdom’, as the Bedouin traditionally support the monarchy.

The Bedouin still populate Wadi Rum (and the area around Petra), although over the last century or so they have become far less nomadic. Today the Bedouin enjoy a truly modern lifestyle, with cellphones and all the attendant trappings of modern life. Nonetheless, they retain the knowledge of their environment that is the true inheritance of their culture.

Photography credit: Petra with Bedouin by muenchmax via Instagram
Petra at night and Dead Sea by Eric Rubens via Instagram