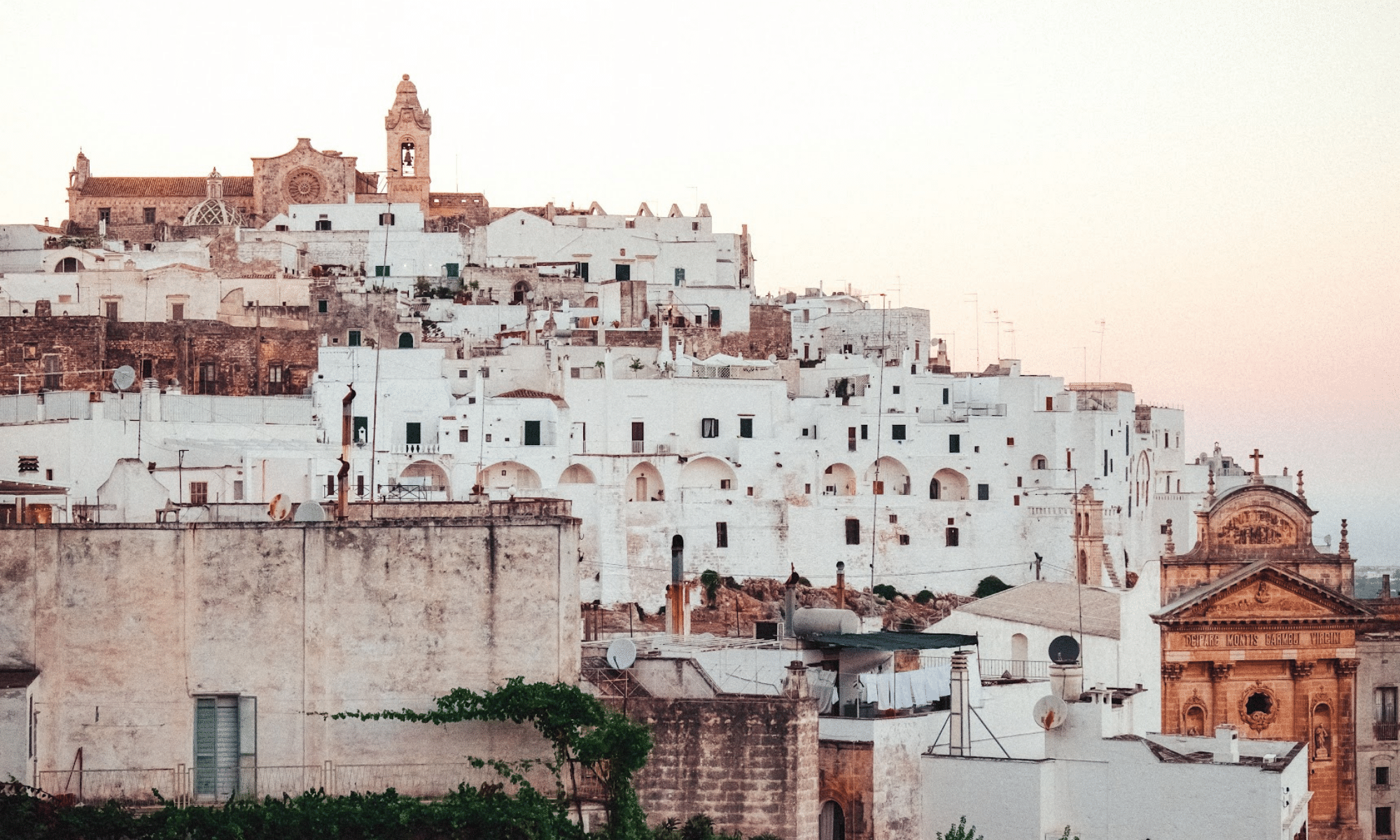 In Deep: A Brief History of Ostuni

Featuring a walled acropolis and whitewashed buildings that stand as a testament to its Eastern influences, Ostuni is (rather rightly) known as La Perla Bianca, “The White Pearl.”

We like to describe Puglia as “Italy, with Greek parents,” and no place epitomizes this more than Ostuni—you could be forgiven for thinking you’re in Greece! Historically, the town has changed hands many times: it has been ruled by the Aragonese, Angevins, Swabians, Normans, Byzantines, Longobards, Spanish and Bourbons. Ostuni is built on three hills and is a perfect example of Pugliese town architecture. Its stratified shape exhibits the different stages of architecture added by each ruling civilization.

Ostuni’s winding alleys are covered in bougainvillea and other lush hanging plants and flowers that perfectly accent the brightly coloured doors and windows. The town’s much-photographed Piazza della Libertà boasts a cathedral that was built in the 15th century in the late Gothic/early Renaissance style. The town is also known for its clay figurines, called fischietti, which are actually functioning whistles!

Ostuni is home to the caves of Santa Maria di Agnano. These caves are a testament to the origins of human life and settlement in Puglia, with evidence dating back to the Palaeolithic era. Providing proof of a Neolithic cult occupation, a hearth, cereals and schematic images of a human face on two vase necks were found in the caves, dating back to the first half of the 5th millennium.

Research that began in 1991 by Donato Coppola (no, not that Coppola) exposed two important burial sites dating back to 24,000 BC. At one site, the remains of a 20-year-old pregnant woman wearing bracelets made of perforated shells were found in a burial ditch, along with the remains of an unborn child in the advanced stages of development. Also included in the tomb was a headdress made of more than 100 seashells covered with red ochre, as well as stone tools and remnants of wildfire.

Coppola’s research led to the conclusion that for 25,000 years the caves were the site of rites and cults dedicated to females.

The Days of Delia

The remains of the pregnant woman were given a name—Delia. During Delia’s time, horses and wild ox were the main prey available. The landscape was coniferous, but with few trees, and the climate was dry and arid, but cold.

One can imagine Delia overlooking the vast plains (much larger than the current landscape because of lower sea levels) in which large herds of horses and oxen grazed. The caves of Agnano were probably chosen for settlement due to their position above sea level, offering great views of the plains so hunters could follow the movements of the herd, ensuring both their hunting success and their ultimate survival. A lot of time was dedicated not only to hunting and gathering but also to rituals that were carried out in the caves, especially burials.