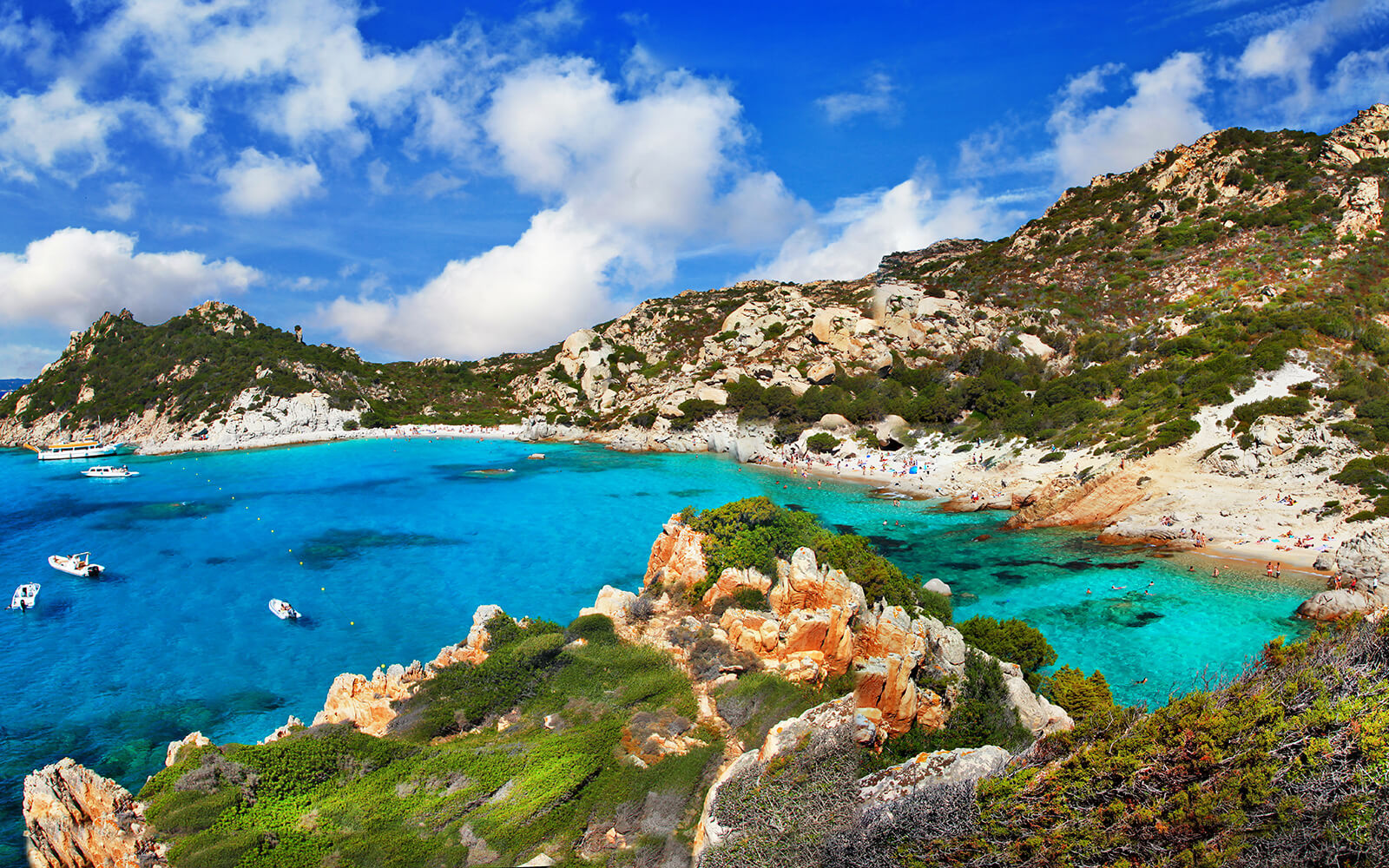 Life in Sardinia is probably the best [one] can wish: twenty-four-thousand kilometres of forests, countryside, shores immersed in a miraculous sea, this corresponds to what I would suggest God to give us as Paradise. -Fabrizio de André

Although I’ve lived abroad for many years, straying far from my home island of Sardinia, including in Africa, Asia, Norway, and now Canada, I’ve noticed something interesting about myself with the distance. I call it ‘my Sardinian eyes’—meaning, I can’t help but carry a little piece of Sardinia with me, no matter how far I roam. I love my island home, and I can’t help but see the rest of the world from a Sardinian perspective. (And I know that I’m not the only Sardinian who feels this way!) Here are a few things that characterize our simple, slow way of life, that you, too, will get a glimpse of, and experience on a visit here.

We Sardinians are proud, and the most important social units we adhere to are our tight-knit families and communities. We’re also really welcoming and friendly. Even in the smaller towns, you will see older people sitting on their porches enjoying their ‘retirement’, or women doing typical needlework as they watch the world go by. Anyone is happy to stop and chat with a visitor and interact, so be open to these exchanges!

Growing up, I always had a sense of security and love, not just within my family but within the community. This ‘looking out for each other’ and sense of solidarity is something I miss, especially living in larger cities abroad. We’re also a people of traditions: for example, when I was back at home at my brother’s wedding, I was explaining to my non-Sardinian friends all the little rituals we observed. It’s something I have taken for granted but realize how special they are, especially since I live abroad now. It’s also very important to we Sardinians that we respect the voices and opinions of our family (and community) elders. Certainly, with age comes experience, and we truly value the wisdom of the older people in our communities and often consult with them on important decisions. (This surely contributes to our being one of the most long-lived places in the world).

If you’re in mainland Italy at a concert or large gathering…look out! You may very well see our famous flag, notable for the heads of the four moors and the red cross of St. George quartering a white background. I have run many marathons around the world with my little Sardinian flag in my pocket the whole time, and without fail, I will always bring it out and run a final victory lap as a proud Sardinian representing home!

There are a few stories that hint at the origin of the flag’s design. As Sardinia was ruled by the Spanish Kingdom of Aragon in 1324-1479, it was said that King Peter I of Aragon created the flag after the 1096 Battle of Alcoraz in an attempt to drive Arabs out of Spain. According to legend, it was only Saint George (of the white shield and red cross) who helped to win this battle for Aragon. When the dust settled, four Moorish princes were defeated, with their severed heads left on the battlefield, informing the design of the flag.

Another subtle (and less gory) meaning? The quartered flag symbolically represents the four giudicati of the island, four independent states that governed Sardinia in the Middle Ages from the 9th to the 15th centuries.

I met a woman recently while buying a gift for my sister; her (Canadian) daughter married a Sardinian and now lives on the island. And here’s one thing she remarked to me about the island: “I like how people take their time.” It’s really an understatement, as when you get here, you’ll feel as if there’s all the time in the world. The priority for us Sardinians is quality of life, and our philosophy is simple: enjoy life and take your time to savour the everyday moments, no matter how small. You, too, will see just how time weaves its magical spell as you slow down to the rhythm of the island.

While the outer coastal cities are more urbanized, there is something to be said about the Sardinian rural way of life—it’s wonderful. I had an elemental childhood, running wild on the beach, on my grandparents’ farm, and generally playing outside amongst nature. Most of us have family land in the countryside to roam in, where we work the land as our ancestors have through the generations. Here is where we Sardinians put aside our phones to enjoy the simple things: sunshine, the earth and the things that grow from it—fruits and vegetables, tending to animals and plants. My niece and nephew go to the countryside daily after school with their parents to pick fruit or just play outdoors. As you travel the island, you’ll see this everywhere you go (and maybe get to participate in it, too).

The Sea and the Coast

One of the things I miss from back home is one of the simplest: it’s the smell of the sea, and the distinctive smell of Sardinia with its trees, plants, herbs and shrubs on the wind. The second I get off the plane, it just hits me and I know that I’ve arrived. I also feel joyful and nostalgic when I return to the beloved beaches, coves, and smaller islands that I know so well. Much has been written about Sardinian beaches, as they’re secluded, dramatically beautiful, clean and safe—truly without compare.

Some of my favourites are hard to get to, and some of the more popular ones are just so pretty that their appeal is hard to hide from the masses! Stintino is one of the big ones, with its white sand and blue water. I also love Argentiera, next to an old argento (silver) mine, the Spanish towers overlooking Porticciolo and Porto Ferro, and Cala Goloritze on the east coast, with its white limestone and endless shades of blue—accessible only after a hike through an ancient cork forest.

Back to The Slow Road Blog
Photography credit: Sardinian sheep by Enrico Pighetti via flickr
Sardinian woman by Silvia Usai via flickr