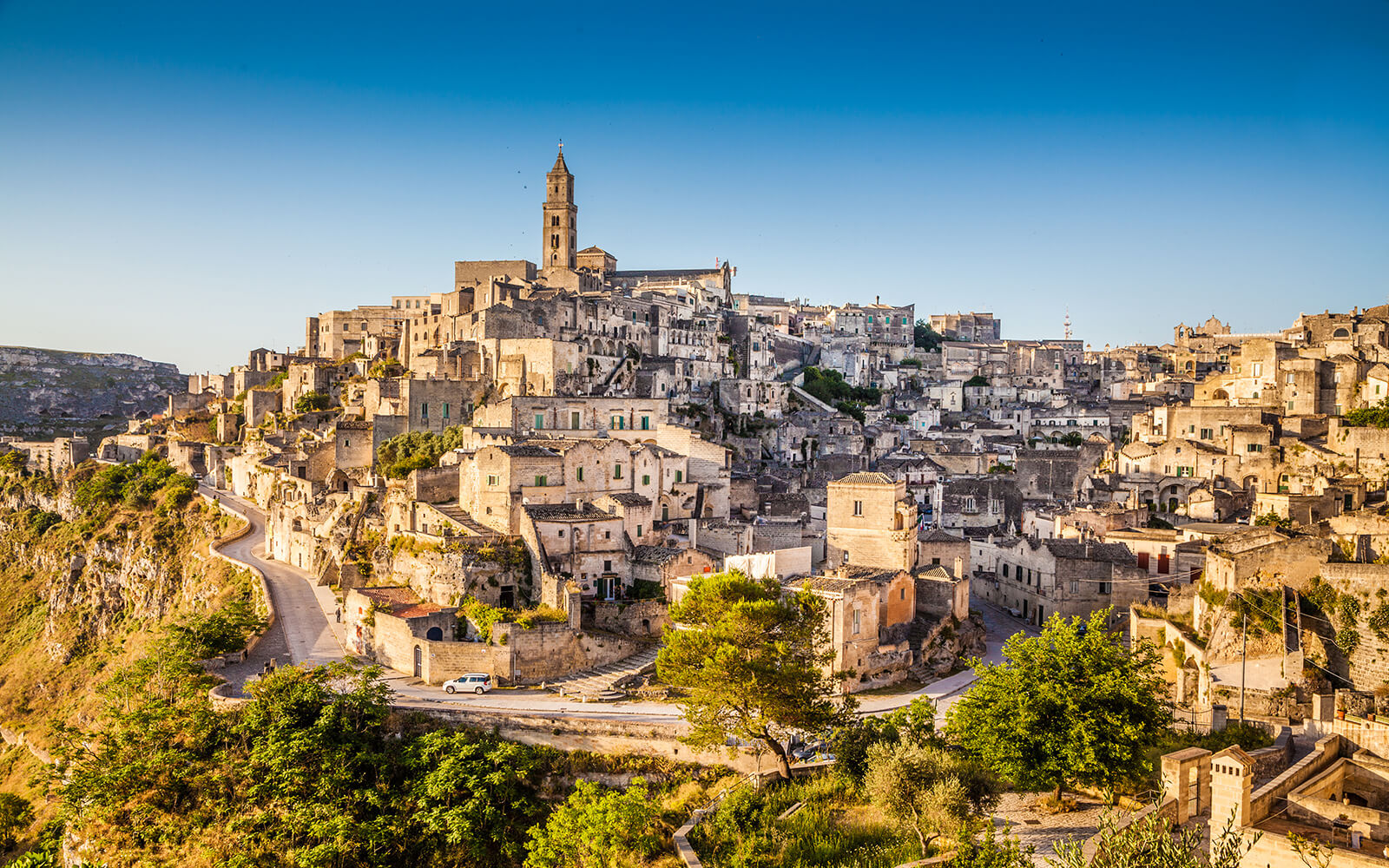 Discover why little-known Matera has shot its way to the top of Europe’s must-visit list this year, as the 2019 European Capital of Culture (a designation it shares this year with Plovdiv, Bulgaria).

We’ve long been exploring the charms of Puglia for decades, but it’s time to take a look at lesser-known Basilicata and the incredible rise of Matera’s profile from la vergogna nazionale—“the shame of the nation”—to a UNESCO World Heritage site. Here’s why this once-obscure Italian region has shot to the top of our list for 2019.

Basilicata: A Little-Known Region With Much To Explore

This southern Italian region is known as the ‘instep’ of Italy’s boot, sandwiched as it is between the  Calabria (the ‘toe’) and Puglia (the ‘heel’), with two coastlines on its edges. The Gulf of Taranto is on its southern border, and on the northwest, you’ll find a short 30-km stretch where the coast meets the Tyrrhenian Sea.

The region of Basilicata is likely named for the basileus (the Greek word is basilikos, as there were Greek colonies in the region as well), the Byzantine emperor who ruled here in the 9th through the 11th centuries. It was also known as Lucania, after the Iron Age tribes who were the first to inhabit the region. There are still few people living in Basilicata, with just about 600,000 people in the region alone—which means for ample possibilities to explore without the fear of overtourism.

Basilicata itself is divided into two provinces, Potenza and Matera. This up-and-coming region has a beautiful countryside that features rolling hills to rival the famed Val d’Orcia of Tuscany without the crowds—and now’s the year to go.

Introducing Matera and the Sassi

There’s but one reason why Matera is on the global culture map this year: the spectacular sassi (simply meaning ‘the stones’). These natural cavelike formations were carved out of the tufa limestone from the Gravina river valley, and served as peoples’ dwellings until as late as the 1950s. Known as la Città Sotterranea—The Underground City—it lacked running water and electricity.

Impoverished families lived here along with their animals, battled malaria, cholera, and other diseases, until Carlo Levi’s writings in the 1950s detailing “dark holes [where] I saw a few pieces of miserable furniture, beds and some ragged clothes hanging up to dry. On the floor lay dogs, sheep, goats and pigs…Children appeared from everywhere, in the dust and heat, stark naked or in rags, eyelids red and swollen… and with the wizened faces of old men, yellow and worn with malaria, their bodies reduced by starvation to skeletons… I have never in all my life seen such a picture of poverty”—shocked the Italian government into doing something for Matera’s inhabitants.

The cave-dwellers were promptly moved out into government housing, and the sassi were left in ruins, a forgotten embarrassment—until the 1980s, when people began to move back in, or renovate their former quarters into the restaurants, bars, and even hotels you will see today (and even stay in); a complete turnaround from the years of difficulty. You can’t beat the sunsets after the daytrippers leave, as magic hour is one to behold in Matera.

One of the Oldest Places on Earth

Another testament to its rich history and justification for its Capital of Culture designation, Matera is one of the oldest continually inhabited places on earth behind Aleppo and Jericho.

Indeed, humans have lived here for at least 9,000 years, and as such, Matera has featured in many film productions’ historical backdrops. It’s been used as a stand-in for Jerusalem in Mel Gibson’s The Passion of the Christ, along with Pier Paolo Pasolini’s The Gospel According to St. Matthew, and more recently as the fictional home of Wonder Woman, Themyscira, in the recent movie.

The Food of Basilicata: Hearty & Honest

Seeing that this is Italy, with such rich foodways and traditions, I shouldn’t skip over the local specialties and the delicacies you can find in Basilicata itself—hearty and honest. This is the region that lays claim to the very first mention of pasta in history; a common dish you’ll want to try is the orecchiete con cima di rapa (‘little ear’-shaped pasta with broccoli rabe), or its bigger cousin, tapparelle (meaning ‘big ears’), along with lucane chiappute (a wider version of the ribbonlike tagliatelle), and so much more.

Other standouts that you should look out for in the region include the caciocavallo podolica della Basilicata, a special cheese made from the semi-wild Podolica cow, which grazes in the Apennine mountains. The cheese is labour-intensive to produce as the animals have a low milk yield, and cannot be domesticated. Also of note is the peperone di senise (Senise pepper) from an agricultural region near the city of Senise, usually hung to dry and featuring in cured meats, local cheeses and other dishes. Finally, look out for the u-shaped Lucanica sausages named after the ancient regional name, seasoned with wild fennel, salt and pepper, along with a spicy variant.

The Rock Churches of Matera

Another worthwhile visit, the early history of Christianity is preserved in Matera with fantastic rupestrian churches that were carved out of the rock—some simple, and others more complex, with different chambers that are linked to each other; there are over 150 here. You will find some still-preserved frescoes painted by monks, dating from the 14th to the 16th centuries. The Matera Cathedral dates from 1270 with a tall bell tower and a Byzantine-style fresco from the 14thC. Other noteworthy cave-churches are the San Pietro Caveoso and San Pietro Barisano, both dedicated to the apostle Peter.

A Unique Experience: Sleep in a Sassi

You can’t pass up a chance to sleep in the oldest part of the Sassi quarters at the Sextantio Le Grotte della Civita, situated in the historical heart of Matera, facing the spectacular Murgia Park. It comprises 18 minimalistic “cave” rooms and an ancient church, all renovated to retain their original shapes and features in full respect of the local heritage. But this isn’t without well-appointed touches like heated floors, Philippe Starck bathtubs, and wi-fi.

For a five-star hotel experience in the heart of the Sassi, there’s also the Sant’Angelo Resort. With all the luxuries of a five-star, it maintains the traditional style of the cave dwellings, complete with breathtaking views and easy access to the labyrinthine beauty surrounding the property.