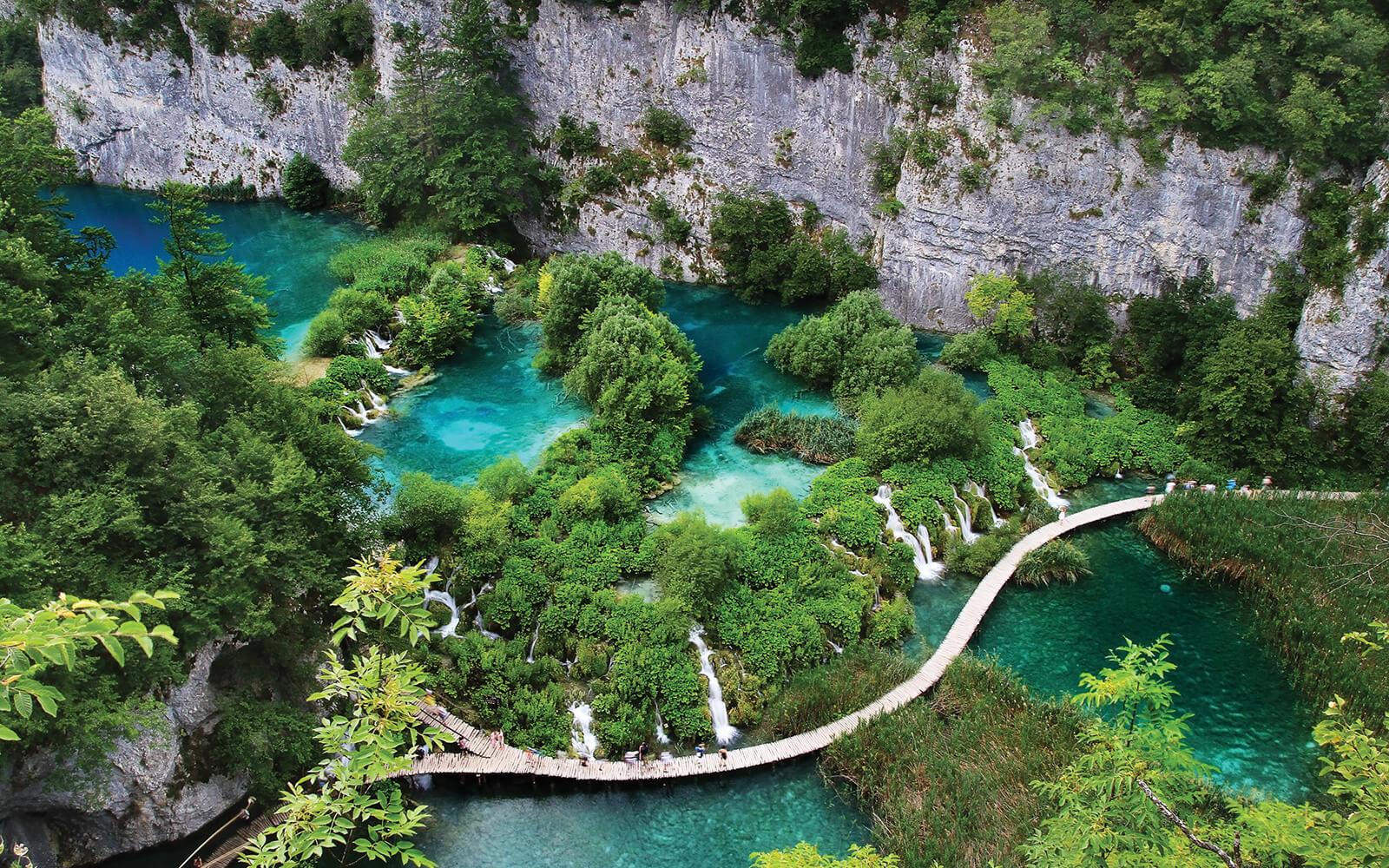 I’ve been lucky enough to traverse our planet over the years, from my native British Columbia to Bhutan and back again many times over, but even I’ve been blown away by the under-the-radar appeal of Slovenia and Croatia. Two states in the former nation of Yugoslavia which retain strong ties to this day, there are plenty of incredible things to do here that are surprising to even the most seasoned traveller.

What the Fjaka? (It’s A State of Mind)

I’ve been designing trips in central and eastern Europe for years, long enough to see Croatia’s Dubrovnik and the Dalmatian Coast become some of the continent’s most sought-after locales.

The folks on the Dalmatian Coast are known in Croatia to have the unique attitude or way of life known as fjaka. Think of it as a particularly relaxed state of body and mind, the ‘sweetness of doing nothing’, with a bit of a daydreamy feel to it.

Travel Advisor Manuela Novak, who grew up in Croatia, explained it to me like this: “It’s like a faint unconsciousness, or more precisely: it’s half somewhere, half nowhere, always somehow in between—a description taken from our poet Jakša Fiamengo.”

There’s a practicality to this attitude, as the blazing-hot summers mean that afternoons are often spent working on the Croatian version of the siesta. But please, don’t be offended if your coffee or your meal comes a little bit (or a lot!) late…it isn’t rudeness or ignorance, it’s merely the laid-back effect of fjaka on display.

Istria on My Mind

While I still recommend seeing the country’s stunning south, I was determined on a recent research trip to find a way to experience Croatia with less crowds. My quest led me north into the country’s much-less visited Istria region…and across the border into Slovenia.

The Istrian peninsula is shared by Italy, Slovenia and Croatia, although most of it lies in present-day Croatia. It’s characterized by beautiful seaside towns and a gorgeous coast that begs to be cycled along, which transforms into undulating hills and charming hilltop towns inland.

The Croatian penchant for merrymaking and genuine hospitality means there’s much deliciousness to be found in the region. There are incredible producers of olive oil, unusually delicious pumpkin oil (a specialty in these parts), eminently drinkable wines, and fantastic Istrian white truffles that rival the best in Piemonte—Italy is a stone’s throw away, after all. I’d recommend a leisurely afternoon meal in a tiny family-run tavern, or konoba, to try Istrian pasta, known as pljukanci or fuzi—along with the locals, whose kindliness and genuine interest translates to meaningful conversations and feeling truly welcome.

Resplendent Ruins in Pula and Poreč

There’s nothing that boggles the mind more than seeing the remnants of past empires still-standing, in this case, the Roman ruins (in fact, more intact than ‘in ruin’) in Pula and Porec, Croatia.

Pula is Istria’s largest city, set on the southern tip of the Istrian peninsula overlooking the Adriatic Sea (check). Here stands one of the best-preserved Roman amphitheatres in the world, with three wonderful rows of columns and archways all in excellent shape, considering it was built between 27 BCE and 68 CE. Concerts are still played here, and there’s nothing better than listening to the sounds of music playing while the sun sets over the water.

Travel along the coast about an hour northwest to Poreč, a two-thousand-year-old town whose crown jewel is its 6thC Euphrasian Basilica, with lovely Byzantine mosaics within its courtyards and interior.

Explore Everything the Light Touches in Slovenia

One thing that comes to mind when I think of Slovenia is that its diversity stands out most: you can stand on the beach and bask in the warmth of the sun, all while looking at the snow-capped mountains that you’ll ski a day or two later.

Speaking of skiing, the Julian Alps is the main attraction in the winter months, with some of the best alpine and Nordic skiing in the world, and many world championships hosted here. In the summer, take to the mountains for some excellent via ferrata routes. Over in Planica, where you can find one of the world’s best ski jumps, one of Slovenia’s biggest parties takes place every March, complete with a festival atmosphere and jumpers doing what they do best.

But you can do practically any activity in Slovenia, blessed as it is with its mountains and nature. Excellent hiking and biking abound, as well as water activities: paddleboarding on lakes, world-class rafting and kayaking its rivers—which are also an avid angler’s haven for fly-fishing.

Buzzworthy: The Beekeeping Culture of Slovenia

Unless you really, really love bees, you might not know that the Carniolan honeybee—native to Slovenia, southern Austria, Croatia and beyond—is one of the most popular bees to keep if you are an apiarist. These hard workers are beloved for their non-aggressive nature, resistance to disease, and ability to adjust population levels based upon nectar availability.

Considering the recent New York Times article on the ‘insect apocalypse’ and the press that colony collapse disorder has received over the years, it’s heartening to know in some places that the practice of beekeeping is alive and well, especially in Slovenia.

Slovene hives are stacked neatly on top of each other, protected from the elements with tidy roofs and even decorated with charming folkloric paintings on the sides, thanks to the influence of Anton Janša, a pioneer of modern apiculture.  Most cultivate bees as a hobby, and at most, part-time, all with the utmost respect and care for their bees. Our local friend, Miha Gantar, says “every 200th person in Slovenia is a beekeeper!”

Ride Like a Royal: Home of the Lipizzan Horse

In Slovenia’s Karst region, you’ll find the home of the legendary Lipizzan (or Lipica) horse, which is descended from just six Spanish stallions and 24 broodmares. Closely associated with the Spanish Riding School of Vienna and developed by the ruling Habsburgs of Austria, the horse is known for its power and agility in military pursuits and for their skills in classical dressage.

Make your way to Lipica, Slovenia to visit the original home of this breed. The Lipica Stud Farm was established with the support of the Habsburgs in 1580, and you can even take a private riding lesson (or simply meet the horses) at this hallowed institution.

Hyperlocal Cuisine with a Dash of Modernity

In general, Slovenian food is hearty, rustic and fresh, with emphasis on sustaining you for a day spent outdoors. And as such, it wasn’t traditionally something that was considered or created to satisfy fine dining demands. But chef Ana Roš , one of the world’s top chefs, has singlehandedly put Slovenia on the global culinary map.

Her restaurant, Hisa Franko, one of the world’s Top 50 Restaurants. Initially on a promising diplomatic career path, her life changed when she met wine expert Valter Kram, who was serving her at Hisa Franko, his family’s restaurant. They fell in love and decided to run the restaurant together to great acclaim. Nestled in Kobarid, a small town in the countryside, you can expect hyperlocal fare that highlights Slovenian products and a new, modern way of Slovenian cooking.

All in all, the culinary experience you’ll find in both Slovenia and Croatia is easily on par with (and at some meals, undoubtedly better than) powerhouses like France, Spain, and Italy, but with far less fanfare.

Which is exactly what I had come to expect from a region that has all the hallmarks of a world-class travel destination, but none of the hype.

Well, almost none of the hype.