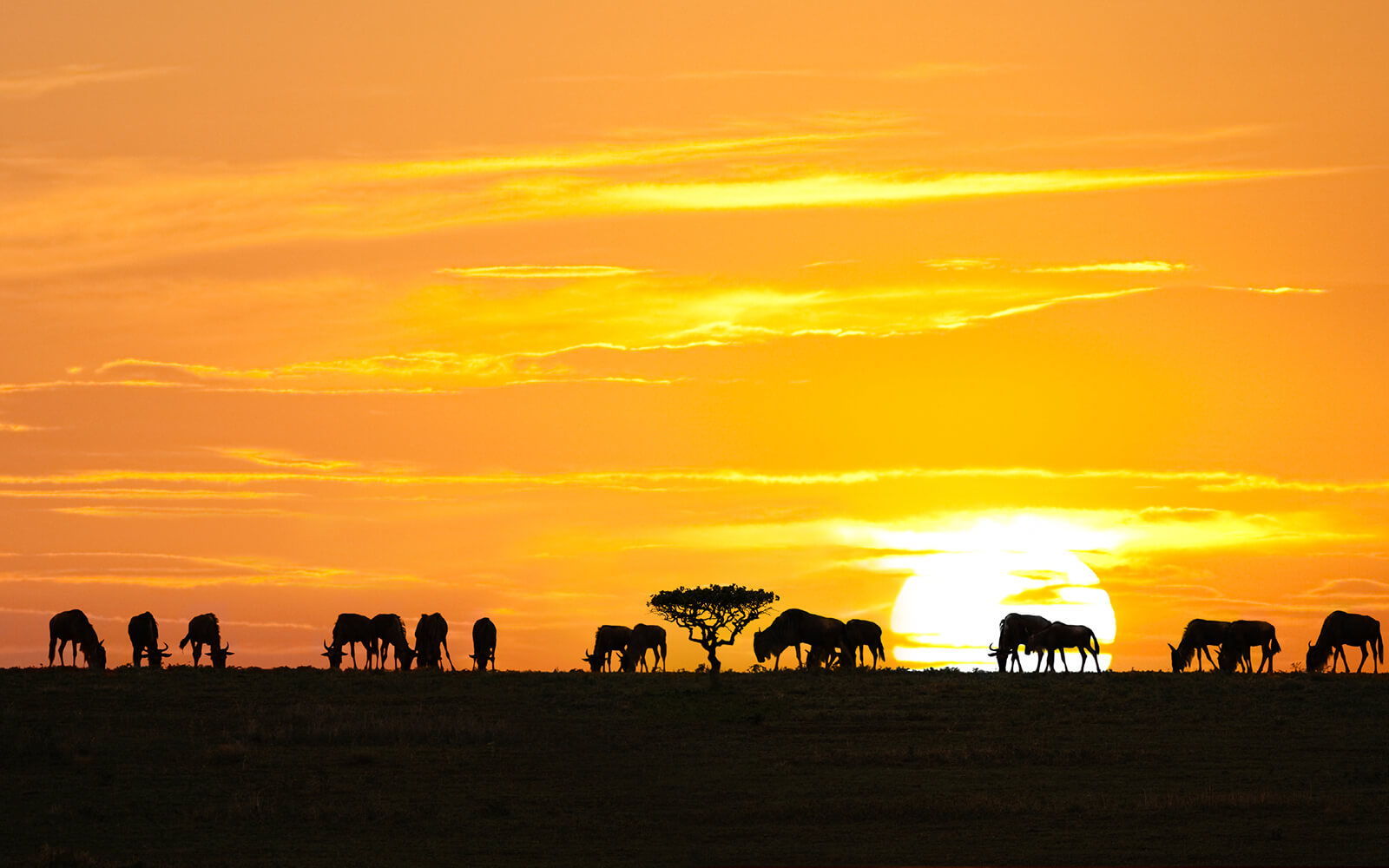 Tanzania is like no other place on earth. Over the years, I’ve hunted for honey with the Hadza tribe in the bush and had dozens of incredible experiences in my travels as a B&R Trip Designer. When you get here, you’ll see just why this beautiful country is beyond compare. The wildlife of Tanzania, combined with its vast and incomparable natural features, makes for a truly ‘beyond the bucket list’ destination—especially if you bring the whole family along.

A wildlife hotspot, Tanzania is home to about 20 percent of Africa’s large mammal population (with 310 mammal species, it is the fourth most abundant on the continent)…not to mention 960 species of birds (the third most abundant). From reserves, conservation areas, and its 17 national parks, you will find more than 42,000 square kilometres (16,000 square miles) of land dedicated to wildlife—about 38 percent of the country’s land. Here are a few of the most iconic.

This national park is Tanzania’s oldest and most popular. In the colonial days, it was a hunting ground for Americans and British colonialists, eventually turning into a partial game reserve in 1921 before it was converted to a national park in 1951. The Serengeti is a place where the Maasai people have been grazing their livestock for two hundred years in these open and seemingly endless plains. For you see, the Maasai word siringet means “the place where the land runs on forever”. (In a controversial decision, the Maasai and their livestock were evicted in 1959 and moved to the Ngorongoro Conservation Area).

It is here in the Serengeti where the great wildebeest migration takes place annually, with one million wildebeest travelling over 1,000 kilometres (621 miles) across the Serengeti and the Maasai Mara in Kenya. Not only will you see the wildebeest moving, you’ll also see about 200,000 zebra and 300,000 Thomson’s gazelle on their way to greener pastures and abundant sources of water. Along the way, the travelling

wildebeest are in danger of predation from the big cats (lions, leopards and cheetahs), not to mention scavengers like hyenas, and Nile crocodiles at river crossings. The journey is fraught with thirst, hunger, and exhaustion for the animals, many who do not survive the trek; a truly dramatic scene for wildlife-watchers.

Birders, hang onto your binoculars, as 500 species of birds can be spotted here. In truth, there is a seemingly endless profusion of wildlife and biodiversity here, including the Big Five (lion, leopard, elephant, rhino, and Cape buffalo), and much, much more—from smaller mammals like the honey badger or the pangolin, reptiles and rare antelopes like the klipspringer, bushbuck, the fringe-eared oryx or the dik-dik.

This massive crater is the world’s largest inactive volcanic caldera. It was formed two to three million years ago, when an ancient volcano exploded and collapsed in on itself. Named by Maasai herders after the sound produced by the cowbell (‘ngoro ngoro’), the crater is located in the greater area of the Ngorongoro Conservation Area, a protected area and UNESCO World Heritage Site (although it is not a national park). The region has been occupied by hominids (not just us but our ancestors!) for the last three million years. While there is still controversy over the relocation of Maasai to the area from the Serengeti, there are many restrictions placed upon human use of the lands; Maasai pastoralists are allowed to graze their cattle here but must enter and exit the area daily.

The Ngorongoro crater is 610 metres (2,000 feet) deep, and the floor covers 260 square kilometres (100 square miles)—as far as the eye can see upon the horizon. And what a horizon…when you descend into it, you’ll be enraptured by the abundance of animals here. The profusion of animal life (and the attendant drama that ensues when species interact with each other, prey and predator) is a draw, as you survey everything going on around you.

Almost like a natural enclosure, the ‘bowl’ or ridge of the crater houses about 25,000 large animals, including the black rhino, the Cape buffalo, wildebeest, zebra, the common eland, the and the hippo. One of the densest known populations of East African lions is found here, although a curious fact here is that the population is rather inbred, owing to the small amount of ‘new’ lions in the area, and the tendency of the dominant males to attack newcomers, hence a lack of diversity in the gene pool.

The Southern Circuit of Tanzania

Often overlooked by visitors, these lesser-known spots in the southern part of the country are filled with animals and very few people—you’ll likely have it all to yourself.

About the size of Switzerland and even bigger than Serengeti National Park at 54,600 square kilometres (21,100 square miles), Selous was established as a game reserve in 1922. You can experience the bush on a walking safari, or take to the waterways and hop in a boat along the Rufiji River to see aquatic animals like crocodiles and hippos up close. Named after Sir Frederick Selous, an English game hunter turned early conservationist, this reserve is a UNESCO World Heritage Site thanks to its wildlife diversity and pristine nature (although there are some private concessions where hunting still takes place). Many animals, including the African bush elephant, black rhino, Cape buffalo, hippos, Masai giraffes, and East African wild dogs are the most abundant in any other African park or game reserve.

A totally different Tanzania experience, this national park is one of the only two protected areas for chimpanzees in Tanzania, accessible only by boat. Along the shores of Lake Tangyanika, characterized by the mountains which rise to 2,462 metres (8,077 feet) at Mount Nkungwe, you’ll also find densely forested areas, ideal to support the abundant chimp population. You can track the chimpanzees by foot, plus hike, fish and boat within the park.

The largest national park in the country at 20,226 square kilometres (7,809 square miles), its name comes from the Ruaha River, which is where most of the game viewing is. From baobab trees to East Africa’s highest concentration of elephants, 571 species of birds (including the hornbill) and 10 percent of the world’s entire lion population, this game-rich park allows you to roam by 4×4 as well as on foot. You’ll hardly see another soul if you visit—another reason to head to this pristine park.

Rising high at an altitude of 5,895 metres (19,341 feet), the tallest mountain in Africa is composed of three volcanic cones—Kibo at the highest, then Mawenzi 5,149 metres (16,893 feet) and Shira, the shortest peak at 4,005 metres (13,140 feet). Uhuru Peak is the tallest summit along the rim of Kibo, at 5,895 metres (19,341 feet). If you so choose, a jaunt up to Uhuru Peak could be the trek of a lifetime. Summiting ‘Kili’, as it’s affectionately called, is similar to travelling from the equator to Antarctica in just a few days, as your route will cross through a number of different ecozones, from rainforest to the Arctic. As far as mountaineering goes, Kilimanjaro is relatively doable for the average person, with the real challenge being the rate of ascent and the acclimatization of one’s body to the altitude—about 25,000 to 30,000 people climb it each year.

Another known as ‘Mountain of God’ in the Maasai language, Ol Doinyo Lengai is an active volcano located within the Eastern African Rift, rising 2,962 metres (9,711 feet). Unique in the world, this mountain erupts rare carbonatite lava. Instead of glowing red, the lava appears black, brownish, or even silvery-gray in the sunlight, and flows at a lower temperature than typical volcanoes—at 500-600 degrees Celsius or 932-1112 degrees Fahrenheit. The viscosity of the lava is also more fluid and faster-moving than that of ‘regular’ lava, but less viscous than water, making for a mesmerizing view if you happen to see a flow. And, when it dries, the lava appears white within a few hours, making for a truly unique landscape you’ll see nowhere else. The ash makes for enriched pastures, and so it sets the stage for the annual wildebeest migration, where it is the nursery for thousands of calves, year after year.

The Alkaline Lakes of Tanzania

Said to be the ‘loveliest lake in Africa’ by none other than Ernest Hemingway, whose hunting trip in The Green Hills of Africa was informed by his travels through the country, this alkaline lake is known for its baboons, along with hippos, elephants, warthogs, buffalo, and impala…along with over 300 types of migratory birds, including flamingoes who flock in the thousands in the wet season (November through May). The lake covers up to 200 square kilometres (77 square miles) of land during the wet season, but is nearly dried up when the rains stop. It is part of the surrounding Lake Manyara National Park (330 square kilometres of 130 square miles), and the UNESCO-sanctioned Lake Manyara Biosphere Reserve, along with 35,000 acres of the Manyara Ranch Conservancy.

Named after the chemical content of the lake, Lake Natron is the flamingo hotspot of the planet. This alkaline lake supports about 3.2 million of the lesser flamingo population nesting here at Lake Natron during breeding season—75 percent of the world’s population—along with greater flamingoes who breed on adjacent mud flats. This salt-and-soda lake features hot water at temperatures up to 60°C (140°F), and flamingoes can drink this near-boiling water without ill effects. These birds of a feather flock together to protect themselves from predation and create ideal nesting environments for raising their young. With less than three dozen sites around the world that are suitable nesting grounds for flamingoes, it’s important to know that while there is safety in numbers, there are very few places with all the conditions available to support the flamingo population. There is a proposal to mine soda ash here, which could endanger the population and upset the delicate balance of the ecosystem.