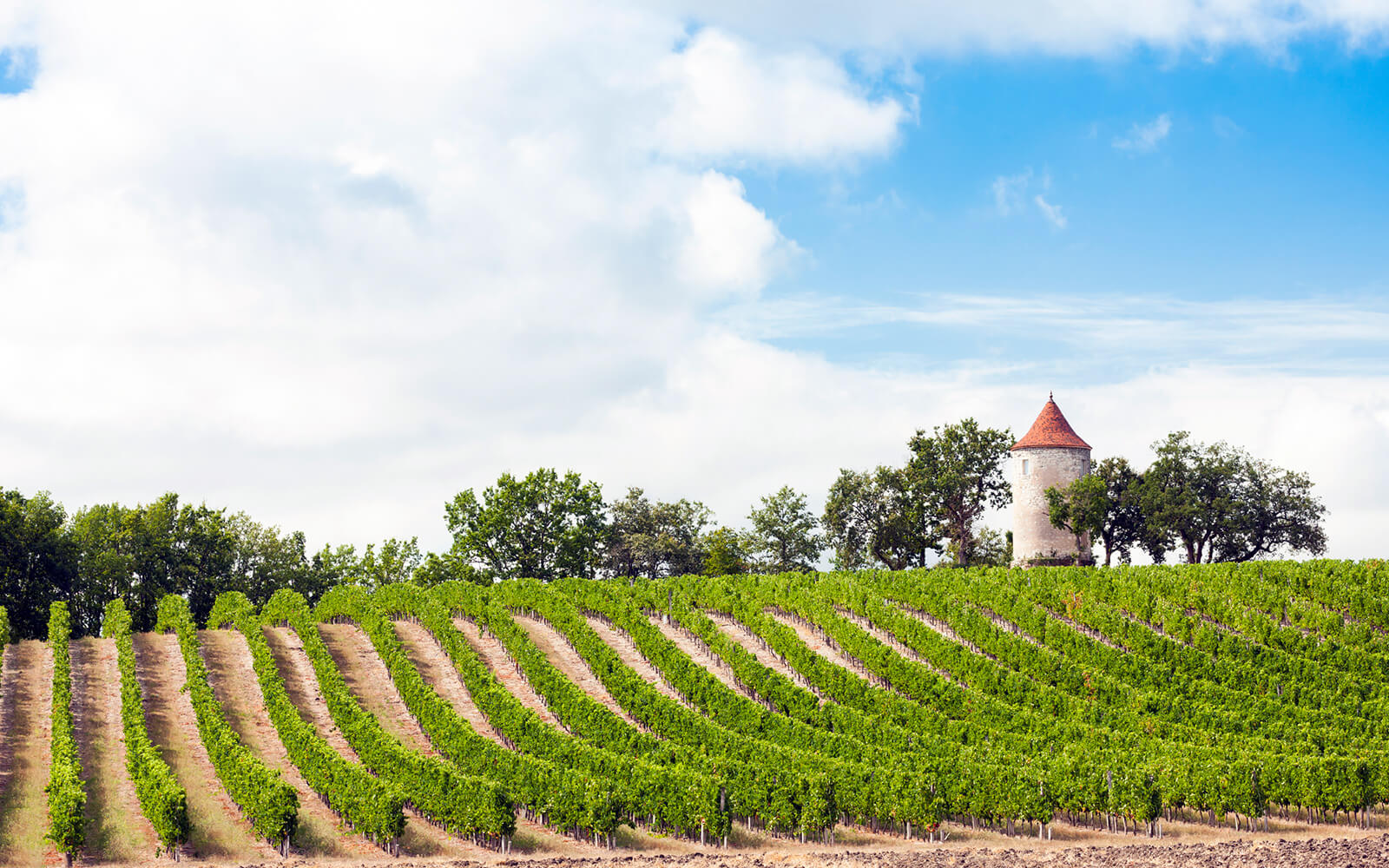 Bordeaux is the world’s largest fine wine region, and one with a rich history dating back to the Romans. The wonders of this region were introduced to the world following Henry II’s marriage to Eleanor of Aquitaine; three centuries of courtly commerce with Great Britain ensured that claret was served at the finest foreign tables. (Even the Meiji Emperor of Japan, reigning in the 1800s, developed a taste for Sauternes!)

The five main red grape varieties in the Bordeaux region are: Cabernet Sauvignon, Cabernet Franc, Merlot, Petit Verdot and Malbec, with Cabernet the dominant grape on the west side of the Gironde, Merlot to the east.  Almost all Bordeaux reds are a blend of two or more of the grape varieties.  The most famous of the red Bordeaux wines, which represent less than five per cent of the region’s total production, are often worthy of decades of bottle ageing.

Sauvignon Blanc and Sémillon are grown and often blended for both the sweet and the dry white wines of the region.  About a quarter of all Bordeaux wine production is white.  Small quantities of rosé, light red claret, sparkling crémant, and fine brandy are also made.  With over 120,000 hectares of vines, the total quantity of wine produced each year is about 660 million bottles, which represents more than a quarter of France’s total appellation contrôlée wine production, but the total yield can vary quite considerably owing to the vagaries of the climate.

Médoc, the most famous red wine district in Bordeaux, and perhaps the world.  The Médoc stretches northwest from the city of Bordeaux along the left bank of the Gironde estuary.  The climate on this peninsula is Bordeaux’s mildest, moderated both by the estuary, and the Atlantic Ocean.

Pine forests protect the vineyards from strong winds off the ocean and help to moderate summer temperatures.  While the Médoc possesses few distinctive geographical features, many hours have been spent charting the subterranean Médoc.  The terroir is a special one, in particular, due to the gravel that is predominant.  This allows for excellent drainage.  The gravels of the Médoc are ideal in this respect and are particularly important in such a damp climate.  In hotter vintages, mature vines can benefit from the extensive root systems encouraged by the gravel.  The gravels of the Médoc also store valuable heat, thereby promoting the grapes to ripen.  Experts say that the best vines of the Médoc grow within sight of the Gironde estuary.

The famous sweet white wine of Sauternes is a specialty that depends on local conditions and a very unusual winemaking technique.  In great years, the results can be sublime: a very sweet, rich-textured, flower-scented, shining golden liquid.  The special technique, one that few châteaux can afford to employ, is to pick over the vineyard as many as eight or nine times, starting in September and sometimes going on until November.

This is to take full advantage of the peculiar form of mold (known as Botrytis cinerea to the scientist, or ‘noble rot’ to the poet) which forms on the grapes in a mild, misty autumn and reduces their skins to a brown pulp.  Instead of giving the grapes a flavor of rot, the botrytis engineers the escape of a proportion of the water in them, leaving the sugar and the flavoring elements in the juice more concentrated than ever.  The result is wine with an intensity of taste and scent, and a smooth, oil-like texture.

To most people, St-Emilion is the appellation of a fine red wine.  It is, however, also the name of a charming village in the middle of the wine-growing district.  Its origins go back to the 8th century when the hermit Emilion dug out a cave for himself in the rock.  The like-minded followed the hermit, and by the Middle Ages, St-Emilion had become a small town.  Today medieval houses still line the narrow streets, and parts of the 13th century ramparts remain.  Famous châteaux in the district include the elegant Figeac, Cheval Blanc, Angelus and Ausone.

This small but distinctive wine region produces opulent and glamorous red wines using mainly the Merlot grape.  Pomerol’s most successful wines are some of the world’s most acclaimed.  The finest wines are made on the highest parts of the plateau, which is predominantly gravel with layers of clay, becoming sandier in the west, where lighter wines are made.  The subsoil here is dominated by a local iron-rich clay, known as crasse de fer, of which Château Pétrus has a stratum particularly close to the surface.  Pomerol is unusual in being the only one of Bordeaux’s great wine districts to have no official classification.