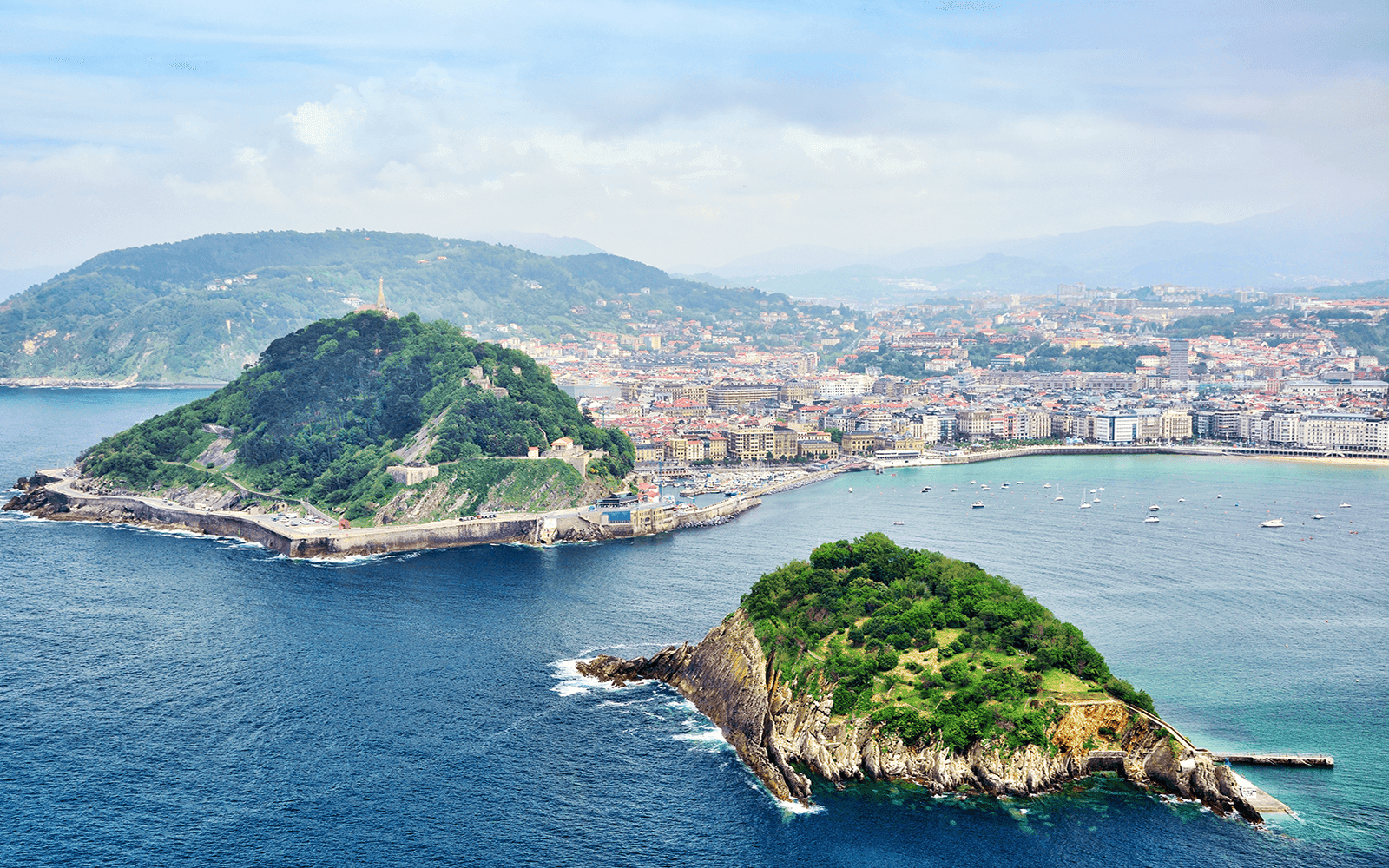 San Sebastián or Donostia in Basque, is a truly walkable city and one of Spain’s most famous destinations. Within a stone’s throw of each other are the beautiful Concha Beach and the atmospheric Parte Vieja (Old Town), said to have the highest density of bars in the world.

Another sight worth walking to is El Peine del Viento (Comb of Winds), a beautiful sculpture embedded in solid rock; a joint project between artist Eduardo Chillida and architect Luis Peña Ganchegui, it is located in the Bay of Conchas, along the coast. A stroll along San Sebastián’s Centro Romántic, with its pedestrianized shopping streets and handsome Art Nouveau façades, is also a real treat.

A gourmand’s paradise, the city is on par with Paris and being home to one of the highest concentrations of Michelin-starred restaurants in the world. Tasty snacks known as pintxos—similar to tapas—are ubiquitous at bars throughout this gorgeous city, especially in the Old Quarter.

Situated just south of the Bay of Biscay in Basque Country, Bilbao is a vibrant and compact city that allows for easy exploration on foot. The opening of Frank Gehry’s Guggenheim Museum in 1997 sparked a renaissance within the city that has put Bilbao back on the map culturally and artistically. The city also boasts an attractive old quarter that is ideal for strolling through, along with many fantastic restaurants and pintxo bars.

Resembling a ship covered in silver fish scales, the museum nods to Bilbao’s port status and the importance of the sea in the lives of the Basque people. Its collections (both permanent and temporary) focus on the 20th century and veer away from the more traditional mediums in an attempt to engage the visitor on a more physical level.

Generally regarded as Spain’s finest art museum, housing more than six thousand works of art that date from the 12th century to the present day, including masterpieces from El Greco, Goya, Gauguin, Francis Bacon and more. The museum is conveniently located close to the Guggenheim for museum-hopping and days filled with art.

The city’s historic centre is a web of main streets on either side of the Nervión River. Bustling with shops, cafés, restaurants and pedestrians, the area is a pleasure to explore. Whether sitting in a sea of Basque berets and listening to the incomprehensible sounds of the Basque language, window shopping for shoes (there are more shoes in Spain than Spaniards) or enjoying a plate of bacalao (Spanish salt cod), getting lost in the Casco Viejo is a great idea rain or shine. It is always open!