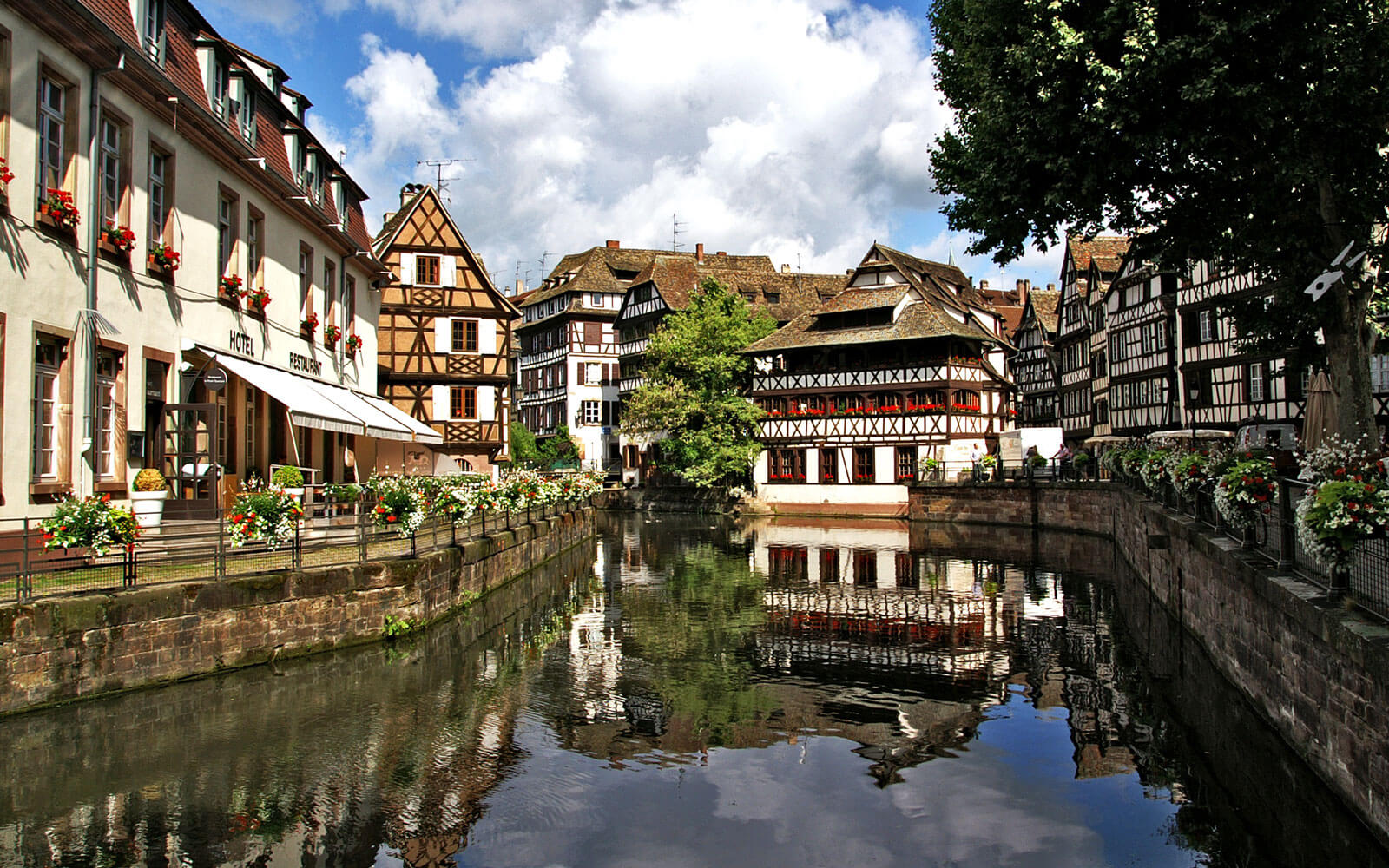 In Deep: What to Know About Strasbourg

A charming city on the western banks of the Rhine River, Strasbourg’s strategic location on the Franco-German border has made it a nexus of culture and a highly-sought territory for much of its history. First inhabited by humans in the Neolithic era, and settled around 1300 B.C.E., it’s been ruled by Celts, Romans, Attila the Hun, the Holy Roman Empire, and annexed twice by Germany in its time, before returning to the French.

One of the few French cities surrounded by water (the old city centre is set upon an island), Strasbourg is where Gutenberg first invented the printing press, is home to one of the largest and most impressive Christmas markets in all of Europe; and is the perfect place to explore the rich flavours of Alsatian cuisine.

Located on the Grande Île, and a UNESCO Heritage World Site, old Strasbourg is easily explored on foot or by bike. The Ponts-Couverts (covered bridges) of the city are at least as old as the 13th century when they formed an integral part of the city’s defences. They were originally built of wood and roofed with tiles. Four stone towers guard the bridges, facing out on the Barrage Vauban.

The Barrage is an enormous dam dating from the end of the 17th century, designed to prevent attackers from entering the city. In the event of a siege, engineers would close the dam completely, backing up the river and flooding the enemy armies off the plains. This dramatic defensive strategy was last used in 1870 against a German siege.

The city’s main landmark, the cathedral is constructed of dark pink sandstone from the Vosges Mountains, and built in the classic Gothic style between the 12th and 15th centuries. It was once was the tallest building in the world, surpassing the Great Pyramid of Giza at the time; its single spire can be seen all over the city. (Be sure to climb the 328 steps for a fantastic view!) On summer evenings, there is often an impressive light show on the façade of the cathedral that is best viewed from one of the many cafés on rue Mercière.

South of the cathedral is the Palais Rohan, completed in 1742 in an extravagant Parisian style. It has hosted Louis XV, Marie Antoinette, as well as Napoleon and Josephine and Charles X. Today, it’s home to three excellent museums: Musée des Arts Decoratifs, Musée des Beaux Arts, and Musée Archéologique.

North of the cathedral, on the other side of rue des Hallesbardes, is the Carré d’Or, or ‘golden square’, formed by rues du Sanglier, des Orfèvres, du Temple Neuf and du Chaudron.

This is a great spot for shopping: be sure to visit La Boutique d’Antoine Westermann on rue des Orfèvres; and the Michelin-starred restaurant Buerehiesel, known for its famous frog-leg soup (you can even get the soup to go!). Also on rue des Orfèvres is the fine cheese shop Au Vieux Gourmet (try the ripe Munster). For Alsatian foie gras, pop into La Boutique du Gourmet, and for fine sweets and dessert, Naegel is Strasbourg’s finest.

East of the Cathédrale Notre-Dame de Strasbourg is the rue des Juifs, and the charming Place St. Etienne. This is the centre of Strasbourg’s nightlife, and is frequented by students and backpackers. Wander down to Quai St. Etienne for a view on the canals, the weeping willows, the churches of St. Etienne and St. Guillaume, and the tiled, classical buildings of the Quartier Allemand (German quarter).