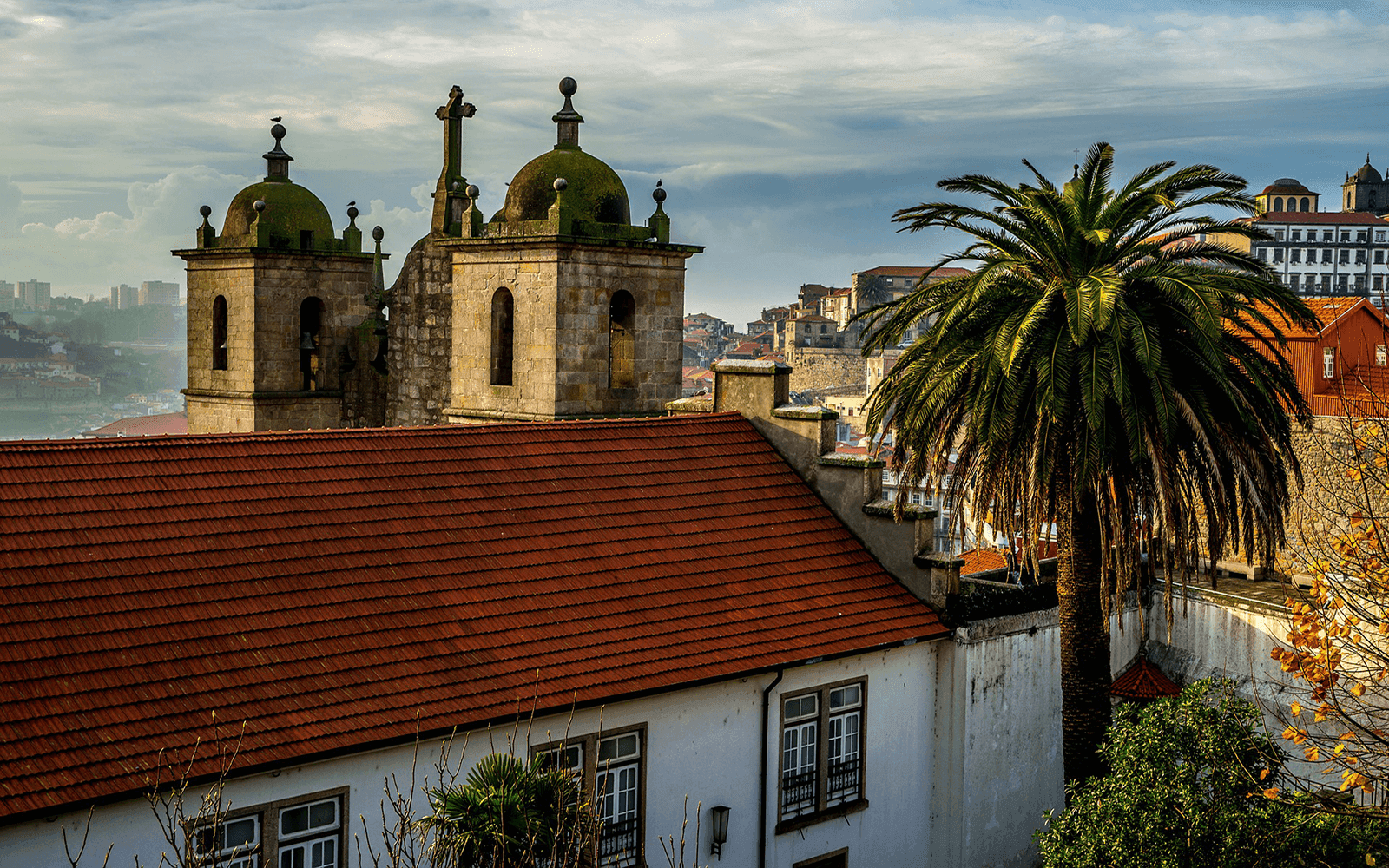 A former outpost of the once-dominant Roman Empire, Porto now reigns as Portugal’s second-largest city. Located along the Douro river estuary in Northern Portugal, this colourful city was declared a UNESCO World Heritage Site in 1996.

This historic hillside city is a maze of steep and narrow cobbled streets, where you’ll encounter ornate plazas, churches, and houses draped in tiled facades. Art is everywhere you turn here, whether in the form of architectural landmarks, anonymous street art strewn across crumbling medieval walls, or the distinctive hand-painted blue-and-white tiles (azulejos) seen in the metro or around town.

If you’re a wine lover, you’ll likely be familiar with the city’s relationship to port wine, since the metropolitan area was responsible for the packaging, transport, and export of the fortified wine, and thus named for Porto. Beyond the libations, the city’s culinary scene is evolving, with an exciting flurry of new-wave Portuguese cuisine and energetic nightlife that filters out onto the winding streets at night.

Exploring the city by foot is one of the surest ways to get to know Porto’s character; I’ve included a few easy walks that introduce you to some of the neighbourhoods of the city, as well as several ways you can delve into the artistic scene.

A seaside walk fit for a fairytale

From the Dom Luis I Bridge spanning the River Douro, simply walk along the right side of the bank until you reach the end of the river where it meets the sea. Along the way, you’ll pass through the colourful Miragaia neighbourhood, once home to the Jewish and Armenian communities of the city. Keep going, and you will pass a small fishing village in Afurada, and then the lovely Garden of Passeio Alegre, ending at the final stop, the castle of Sao João: a lookout and fort at the edge of the ocean.

Get lost in the narrow and ancient streets that run from the Porto Cathedral (Sé do Porto) to the nearby neighbourhood of Ribeira to discover another side of Porto. The neighbourhood is located right in the historical centre, and you’ll find a lovely square with cafes, restaurants and more.

A decorated city invites you in

Another one of my favourite walks is to spend time along the Rua das Flores at a vintage café or two, passing by the São Bento train station. Keep going to reach the Baixa (downtown) area along the Avenida dos Aliados, perhaps for a bite to eat and then an apero. You’ll find many of the azulejo decorations on the buildings here, too.

The vibrant arts scene in Porto is worth checking out; here are a few key places to find inspiration!

Photography: Centro Português da Fotografia
A dramatic setting for a photography museum, this building, built in 1796, was once the Relação prison. Walk through the fortified gates to view the exhibits, as well as a collection of cameras, all housed in former jail cells. From the upper floors, you’ll also be blessed with lovely views of the city.

If art is more your speed, don’t miss the Serralves Foundation of Contemporary Art, with its adjacent, beautiful gardens and massive catalogue. In the summer, you can listen to jazz concerts and other cultural festivals in the park itself. The building was designed by architect Álvaro Siza, a hometown hero and Pritzker Prize-winning architect (1992) who has also designed several buildings in town, including the Faculty of Architecture for the University of Porto.

His fingerprints ever-present on the city of Porto, it bears mentioning that Álvaro Siza Vieira also designed this beautiful Michelin-starred restaurant at the water’s edge! Located in the neighbourhood of Matosinhos, dine on chef Rui Paula’s spectacular food in a dramatic setting, overlooking the ocean.

Another architectural landmark, the quirky Casa da Musica, designed by Dutch architect (yet another Pritzker Prize winner) Rem Koolhaas, is worth visiting. Check out the calendar, filled with a wide range of concerts and other events.

Back to The Slow Road Blog
Photography credit: Se do Porto by Bobo Boom via Flickr
Foz do Douro by Celine Colin via Flickr
Bank of Portugal by Yellow.Cat via Flickr
Azulejo church by Nicolas Vollmer via Flickr
Centre of Photography by Ricardo Calovi
Fundacao Serralves by Nacho Pintos via Flickr
Casa da Musica by IK via Flickr