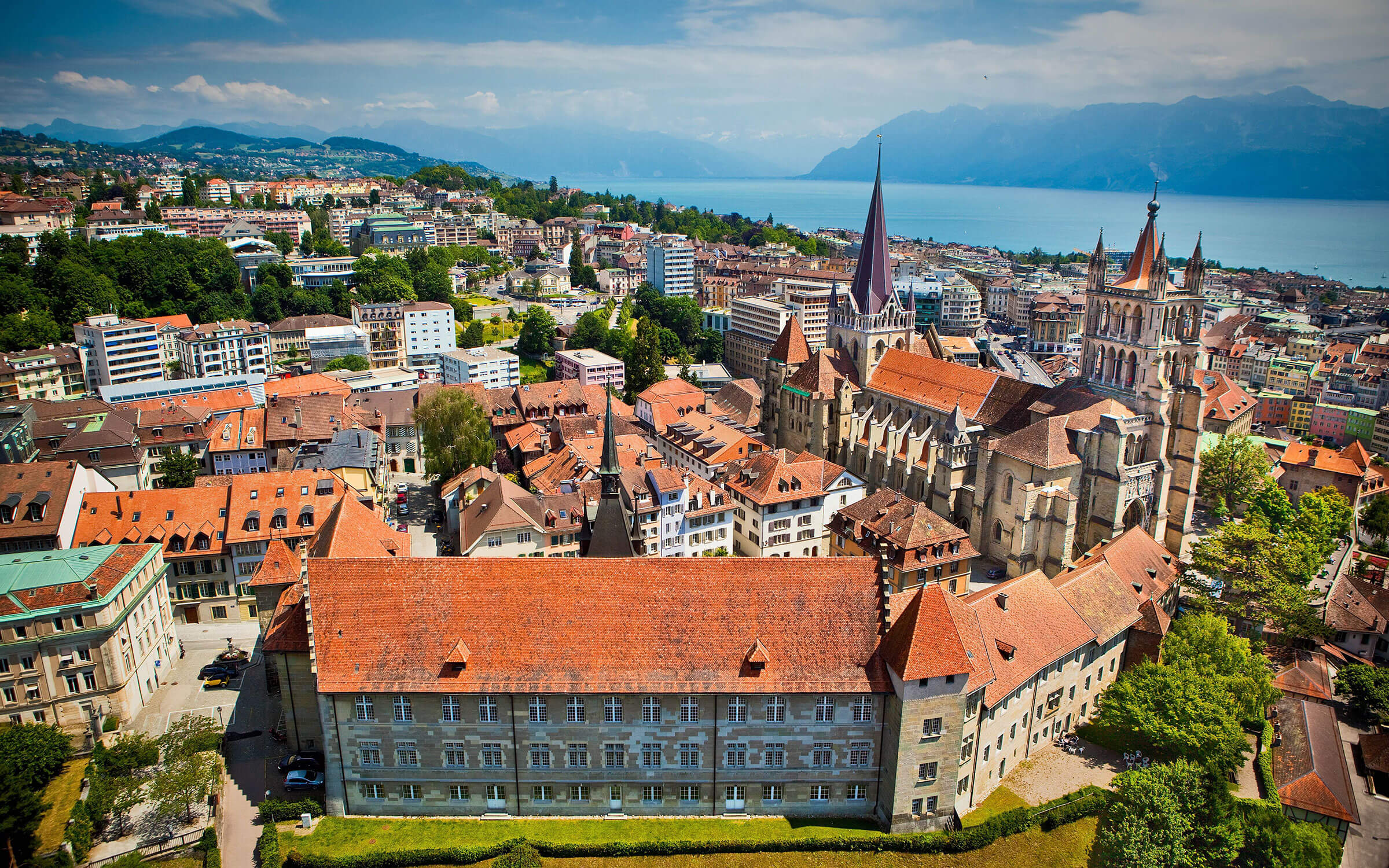 15 Ways to Experience the Culture, History & Natural Treasure of Lausanne

Must Sees | Rest of Europe | By Christopher Litt

Lausanne serves as a splendid introduction to this intriguing and beautiful country at the heart of Europe.

This is a city that holds an astonishing variety of cultural, historical, and natural treasures, and reveals them in an appealingly pure fashion.

Standing on its lively waterfront, you can see the Alps reflected in the brilliant blue waters of Lake Geneva (Lac Léman in French).

In the course of a single stroll along the city’s avenues and alleys, you might come across an ancient landmark, a modern hive of technological innovation, and a thriving urban garden bursting with wildflowers.

As a microcosm of Switzerland, Lausanne is at once compact, diverse, and full of surprises. Here’s a list of just some of the ways you can get acquainted with this Swiss beauty.

15 Things to Do in Lausanne

As Einstein’s home for his annus mirabilis (the miracle year in which he produced some of his groundbreaking papers), it’s fitting that Switzerland continues to host some of the best minds in physics today.

This facility is open to the public with daily tours that reveal the fascinating world of cutting-edge physics research. You can hop on the efficient and punctual Swiss train service in downtown Lausanne and be there in 90 minutes.

The Swiss have long been famous for the precision of their clockwork. The International Museum of Horology, located in La-Chaux-de-Fonds in the Jura mountains, offers an interactive and varied collection of timepieces, ranging from the very beginnings of the craft to the latest in digital technology.

You will also see how the Swiss applied these mechanisms not only to timepieces, but to automata: lively wind-up figurines of humans and animals that danced, walked, sang and even played musical instruments on their own to entertain the courts of Europe in centuries past!

Eager to see the city from a different perspective? Why not climb aboard one of the beautifully restored Belle Époque steamships of the Compagnie Générale de Navigation (CGN)?

From Lausanne, you can travel all over Lake Geneva, including across to Evian, famed for its pure spring water, and nestled under the towering Alps. Other lake cruise options include classic sailboats and solar-powered boats.

Whether you choose the pastoral beauty of the Jura, the majesty of the Alps, or the stately lakefront promenades, the landscapes of Lausanne are certain to stir the soul and fire the imagination.

5. Cool Down and Chill Out

There is nothing better on a sunny day than relaxing on the sandy beach of Vidy and taking a dip in the fresh waters of the lake.

Would you rather just get your feet wet? There are pedal-boats, stand-up paddle boards, and lots of other fun options available for rent. There are also nearby aquatic parks complete with waterslides for the adventurous.

Charlie Chaplin, the whimsical icon of American cinema, lived in Lausanne for 25 years, and four of his children were born here.

Chaplin’s World, located at Chaplin’s former residence in nearby Corsier-sur-Vevey, is more than a museum: it’s a “total-immersion-space,” and it has gotten rave reviews!

Here you can roam replicas of Chaplin’s film sets to learn more about the personal life and artistic accomplishments of the Little Tramp who changed the world of cinema.

Before Switzerland was Switzerland, the Roman Empire had taken over Lac Léman and the Rhône waterway as a vital trade route.

The Roman city of Lousonna (sound familiar?) was established around 15 BCE. You can still see the identifiable ruins of the ancient city, including a forum, houses, and other features.

Lausanne was the scene of the founding of the modern Olympics in the early 20th century, and is still seat of the International Olympic Committee.

To get up close and personal with the Games, head to the Olympic museum in its beautiful grounds on the shores of the lake.

Here, you can see a variety of artifacts from Olympic games over the past decades, from the apparel worn by famous athletes, to rowboats, bicycles, and other equipment used over the decades.

Along the way, learn how the modern Olympic movement began, and about the inspiration that fuelled its founders.

Occupying a unique spot between the Alps and the Jura, with a diversity of microclimates all packed into a small region, Lausanne has plenty to offer when it comes to flora and fauna.

Besides its many urban parks, Lausanne showcases this natural beauty at the Musée et Jardin Botaniques (Botanical Museum and Garden), which also features temporary exhibitions.

Crowned by its cathedral (pictured in the banner at the top of the post), among the finest examples of Gothic architecture in Switzerland, Lausanne displays myriad marvels for arts and architecture aficionados of all stripes.

Walk its streets and you will see examples of medieval, Renaissance, neo-classical, art nouveau, modernism, and every style in between, side by side.

In walks along the waterfront with its Belle Époque masterpieces, you can relive the heady days when Coco Chanel, Josephine Baker, Rita Hayworth and other luminaries mixed and mingled in this idyllic setting. Be sure to have lots of free memory on your camera!

Every year, the Swiss Riviera bursts forth in sonic splendour with a panoply of musical festivals to please all audiences.

You can hear classical virtuosos play Bach fugues on the beautiful organ in the medieval cathedral; experience a bold, star-studded line-up at the world-renowned Montreux Jazz Festival; or dance the night away at Paléo, an electronic festival, or Lausanne’s many clubs, which offer everything from tango to trance.

You can also catch free concerts in parks and the Place du Flon, the always-lively square in the heart of Lausanne.

For such a small country, Switzerland manages to produce a wide variety of wines in several regions; maybe it is a well-kept secret because the Swiss keep most of it for domestic consumption!

Lausanne sits a mere stone’s throw away from the UNESCO-designated world heritage site, the vineyards of Lavaux. Here, you can explore the mesmerizing terraced landscape, where every square metre of sun-soaked slope is planted with vines (mainly the Chasselas, the region’s principal grape).

See the vintners at work, and explore the history and terroir of the region. Of course, the best way to learn is to drink the wine! You can do this by visiting wineries, or at sophisticated wine bars and shops in Lausanne. A good place to start is the Yatus wine bar and store in the city centre.

As a city of bon-vivants and gourmands, Lausanne’s culinary selections shine with everything from Michelin stars to lively bistros and brasseries.

The pick-up hotel for our Switzerland E-Biking trip, the Beau-Rivage Palace, features the Ann-Sophie Pic, one of the finest restaurants in the city. Other Michelin-starred restaurants include La Table d’Edgar and Eligo, both in the heart of the city.

Among the countless fine options for more casual dining, a personal favourite of mine is the Café de Grancy, which offers a wide selection of Swiss wines and a fresh, sumptuous seasonal menu.

The ambience of Lausanne’s many historical dining rooms, immaculately preserved and restored, adds elegance and warmth to the dining experience.

Long known as a discerning and cosmopolitan city, Lausanne shopping sparkles with the best that Switzerland and the world have to offer. It’s no accident that Coco Chanel loved to visit the city!

Here, you can find that perfect watch or Swiss army knife, high fashion and designer accessories, or even an impeccable cigar for a walk by the lake. (After all, this is where Churchill came to ruminate during international summits…)

Switzerland has long been known as a place to revitalize and get healthy. In keeping with this tradition, Lausanne features numerous spa options, from the deluxe spa at the Lausanne Palace & Spa, to the Bodhi Thai Herbal Spa.

For a more natural option, try the thermal pools at the Bains de Lavey, which are fed by the hottest spring in Switzerland, which lies at a depth of 600m below the picturesque Alpine Valley floor where the baths are located.