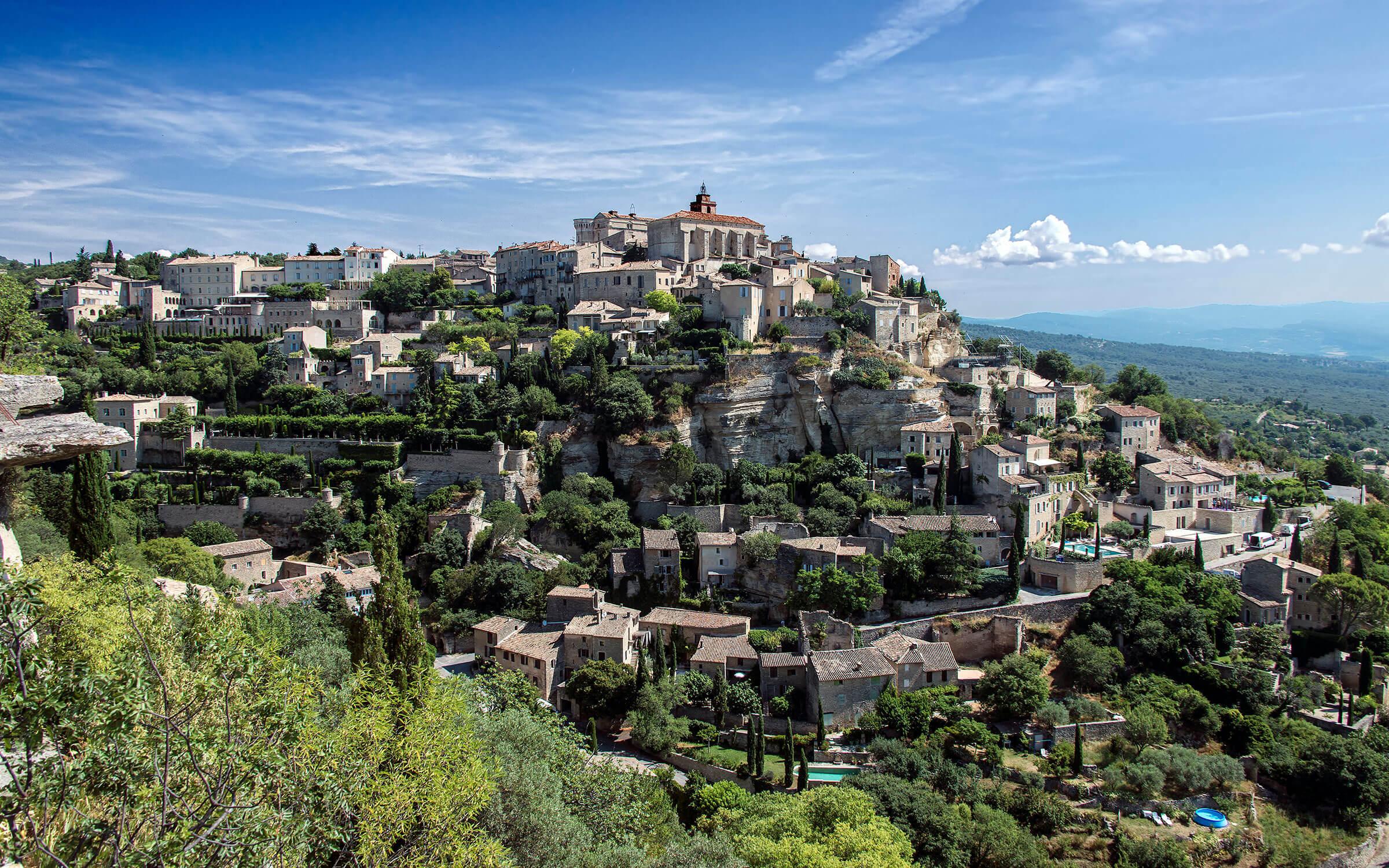 In Deep: The Charming Towns of France's Luberon Region 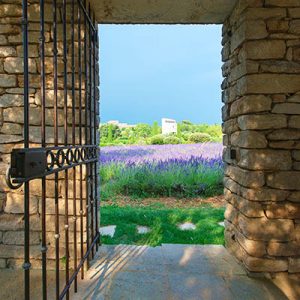 From Van Gogh and Mistral to Peter Mayle, the corner of Provence known as the Luberon has long called to creatives—and with good reason.

Beset with charming and idyllic towns rich with history and culture, this region is one of France’s most languid and lackadaisical.

Below is a brief primer on some of its most charming hot spots.

An Introduction to Luberon France

Stretching 65 kilometres (39 mi.) from Cavaillon to Manosque, this valley is divided by the Combe de Lourmarin, with the western region referred to as the Petit Lubéron.

The Lubéron is known for producing some of the best vegetables and lamb in France. It was largely deserted until the early part of the last century when a few artists started to colonize the villages of Gordes, Roussillon and Lacoste.

This movement went into overdrive with the publication in the late 1980s of Peter Mayle’s book A Year in Provence (set in and around the village of Ménerbes). Thankfully the rush has died down somewhat, although the area remains very popular, and rightly so, as the countryside is magnificent and the villages are all interesting and unique.

The Abundant Charm of Luberon Villages

Apta Julia, named for none other than Julius Cesar himself, is now simply known as Apt. The Saturday market here rivals that of Forcalquier, and in the fall you will invariably see some curious figures lurking about with blue plastic bags in their hands. These are the truffle hunters, in town to peddle their wares.

Apt is also the capital of candied fruit. Here, water is extracted by hand from the fruit and replaced with a sugary solution. You can smell the delicious scents emanating from the candied fruit factory on the edge of town.

There are two sights not to be missed in Apt: the Cathedral of Saint Anne dating to the 13th century, and the “shroud of St. Anne,” an Arabian banner brought back from the first crusade. 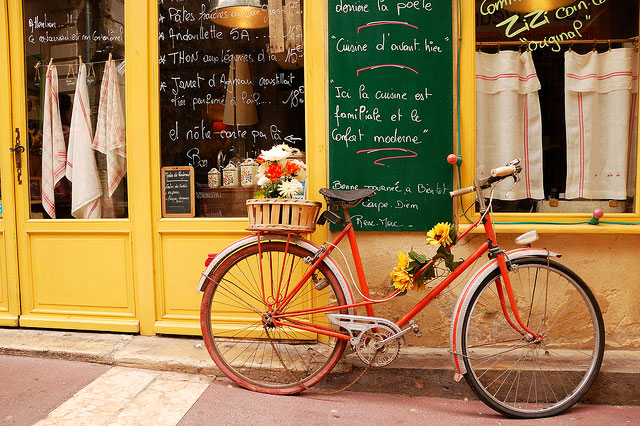 Les Baux was also legendary as home to many famous troubadour poets in 13thC Provence. While the lords of Les Baux were fighting to gain control of Provence, the court poets entertained their ladies. The troubadours espoused a unique version of love, extolling the virtues of unsatisfied longing: both that of the lady for her absent lord and that of the poet for the lady of the court.

Not surprisingly, the lords weren’t happy when they returned to find their ladies wooed by these poet-minstrels, and many of the troubadours were unceremoniously thrown from the town ramparts.

In the 16th century, the settlement of Les Baux became a Protestant stronghold with about 6,000 inhabitants. Several Renaissance-style buildings survive from this period.

In the 17th century, Cardinal Richelieu (he of Three Musketeers fame) ordered that the medieval fortress at the centre of Les Baux—the Citadelle—be destroyed for fear that it might be used in a rebellion against the king.

Thereafter, the town’s fortunes declined. The last inhabitants of Les Baux abandoned the site in the 19th century.

In the last 25 years, however, Les Baux has come back to life, and today it is classified as a national monument, boasting a population of about 400.

Prince Rainier of Monaco currently holds the title of Lordship of Les Baux. The stained glass windows of the 12thC church of St. Vincent were his gift to the town.

The church and the citadel in Ménerbes date from the 13th and 14th centuries. The presence of such grand, expensive buildings hints at the strategic importance of the town during the Wars of Religion (1562-98). 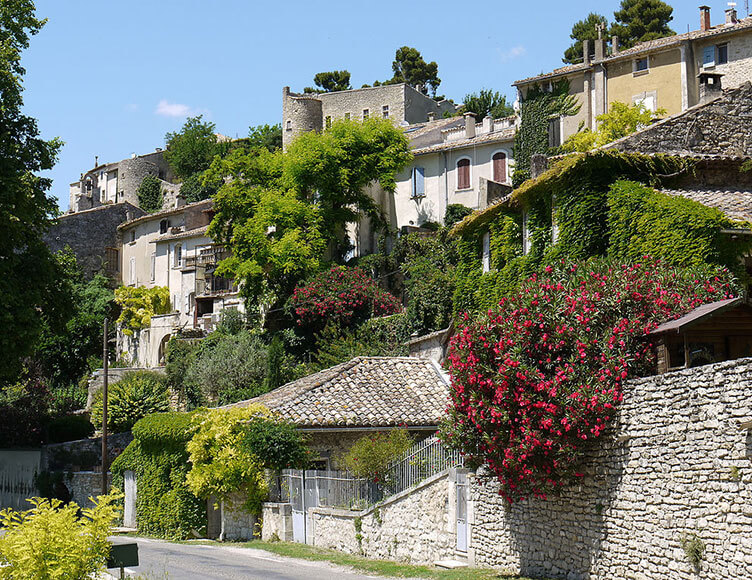 Ménerbes is an incredibly charming little town perched high on the southern side of the Lubéron Valley. As mentioned, Peter Mayle wrote of life here in his widely popular A Year in Provence. His house was just outside Ménerbes, but he moved away after the success of his book attracted droves of visitors to his doorstep.

The streets of the old town of Bonnieux are lined with fine 16thC mansions, testifying to the opulence of this town, which belonged to the papacy until the Revolution. At the top of the hill, the 12th c. parish church is the centre of town—well worth the climb!

In the upper village, the old bakery is now a museum on the history of bread-making.

The village of Lacoste is similar to Bonnieux but has a more “ravaged by time” quality to it. The writer, the Marquis de Sade, had a château in Lacoste; the village’s history, therefore, is dominated by his legacy.

The de Sades were a local family whose members included not only the famous Marquis but also the husband of Petrarch’s “Laura.” The Marquis fled to his château to escape the scandals that dogged him in Paris. He lived in Lacoste until his arrest in 1778.

Freed from the Bastille by the Revolution in 1790, he published Justine, ou Les Malheures de la Vertu (Justine, or The Misfortunes of Virtue) the following year under the newly established freedom of the press. Upon his death in 1814, his concierge repossessed the château.

It is now the property of another seigneur, M. Pierre Cardin, the inventor of pret-a-porter (ready to wear). In the summer many concerts and theatre plays are performed in the little quarry next to the château.

Cardin is something of a polarizing figure – locals either love or hate him. In 2010, he tried to build a golf course just outside Bonnieux, an attempt that made him almost as popular as the famous Marquis de Sade.

Pictured below and in the banner above, this magnificent village is perched on a steep escarpment overlooking the Lubéron Valley. 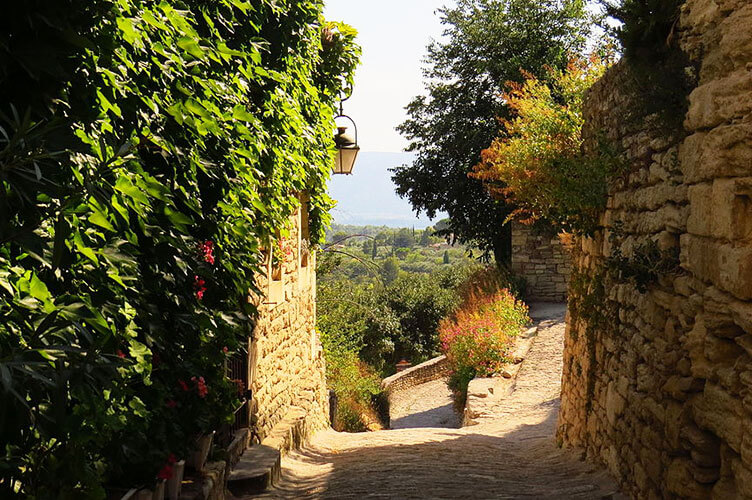 Much of the town had to be rebuilt after the Second World War. In 1944, a Marquis killed a German soldier, and the Germans retaliated by setting fire to many of the houses. A number of people were killed before a monk from the Sénanque Abbey intervened and prevented further death and destruction in the village.

The large Renaissance château dominating the town centre is now closed to the public. As you wander around the town, be sure to visit the church that, while unspectacular architecturally, has retained its original 17th c. polychrome decoration—a real rarity.

In 1879, a road was built to the summit, and a weather station was established there. It took six hours to reach the top by horseback; the first cars made the trip in 2.5 hours. The first official motorcar race to the top took place in 1902, the winner summiting in 27 minutes. Today, the record is held by a BMW Formula 2, ascending in four minutes and two seconds. (For security reasons, motorcar races on Mont Ventoux have been discontinued.)

The bicycle, however, still has its place on Ventoux, the mountain being used regularly in the Tour de France. The north side of Ventoux is colder, steeper and covered with pines. The south side is gentler, with fruit orchards and vineyards on its lower slopes, and oak, North African cedar and black pine further up. Above 1,600 m (5,250 ft.) only juniper trees and alpine flowers grow. 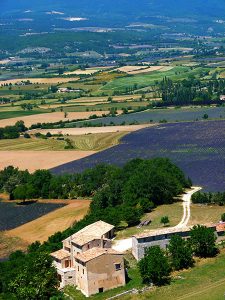 The village of Sault is a UNESCO World Heritage Site, known for its clean air, lavender fields and beautiful hiking trails. L’Église Notre Dame de la Tour, with its beautiful Romanesque nave, is worth a visit.

From almost everywhere in town, including the main square, the views of the valley and Mont Ventoux are breathtaking.

Also worth visiting is the historic store of André Boyer, Maître Nougatier. This store has been producing delicious nougat since 1887. It is located just off Sault’s main street, south of the square.

St-Rémy has been inhabited for over 2,300 years. Surrounded by the fertile plains of the Rhône Valley, it is perhaps the most quintessential Provençal town.

Today, the population is about 9,000, a figure that easily doubles or triples during tourist season. St-Rémy’s economy depends on tourism, the extensive fruit orchards surrounding the town, and the agriculture of the fertile plains to the north.

To the south, the white peaks of the Alpilles stand out against the blue skyline.

You may be tempted to think “Paradou” is derived from “Paradis.” In fact, the name of this village was taken from the windmills that once provided it with a source of income.

The windmills were situated along the banks of the Arcoule River. Along with Maussane and Mouries, Paradou is one of the foremost olive oil producers in France.

This small town, with its fine urban architecture, is associated with the memory of the writer Alphonse Daudet.

Tired of the bustle of Paris, Daudet moved to Provence in the early 19th century, where he wrote simple yet moving stories about life in the country. He sent these stories to a friend, who published them in a Parisian newspaper, and soon the first interested “tourists” began visiting Fontvieille—long considered a backwater.

One of Daudet’s most famous stories is M. Seguins’ Goat. It tells of a shepherd, M. Seguin, who lost six goats to a wolf of the Alpilles. His last and most beautiful goat, Blanchette, wished to roam free in the nearby hills; and when she explained this desire (in this story the goat could talk – just go with it) to M. Seguin, he locked her away in the stable. Eventually, Blanchette escaped and disappeared into the mountains.

After a day of carefree roaming in the wild, she heard M. Seguin’s horn calling her back, but tragically, so did the wolf. In the end, Blanchette was killed by the wolf before M. Seguin could reach her.

Check out the below clip for an animated telling of the story:

The image of the windmill is a recurring theme in Daudet’s stories, and he chose a small windmill outside of Fontvieille as the home of the narrator in his collection of short stories, Letters from My Windmill.

This windmill still stands today and is located on a small hill to the south of the village. From here, the view on Les Alpilles and Tarascon is superb.