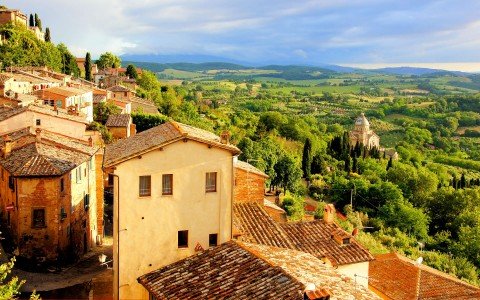 In Deep: A Brief History of Montepulciano

Perched between two of Italy’s most scenic valleys and a frequent prize for two of Tuscany’s great city-states, the history of Montepulciano is (almost) as rich as the famous wine that bears its name.

Montepulciano was reputedly founded in the sixth century by the people of Chiusi who were fleeing the Barbarian invasions. The first written accounts of the town refer to the settlement as Mons Politianus—which explains why the townspeople are known as Poliziani.

Due to its strategic position overlooking the Val d’Orcia on one side, and the Val di Chiana on the other, the town was constantly being fought over by the Florentines and the Sienese. In 1202, the Poliziani chose Florence as their protectorate (ostensibly because it was farther away and could assert less control over their lives).

Over the next 200 years, however, Montepulciano changed hands several times; this flip-flopping of ownership is the reason for the town’s artistic riches, as each ruler sought to out-do the last.

The final reversal in ownership happened in 1511, when Montepulciano once again came under the jurisdiction of the Florentines. Florence’s influence on the town is obvious in the style of Montepulciano’s palazzi, which bears the symbols of Florence: the giglio—or Florentine lily—and the marzocco, the heraldic lion.

Montepulciano is also the birthplace of one of the Renaissance’s most celebrated lyrical poets, Poliziano (né Angelo Ambrogini), who took the Italian version of his hometown’s ancient name as his own.

Today, the town is most famous for its wine: vino nòbile di Montepulciano. Described as the “king of all wines” by a 17thC poet, it was one of the first with an origin guaranteed by the Italian government.

Montepulciano wine is a blend of prugnolo gentile (a type of Sangiovese, the predominant varietal in Chianti and Brunello di Montalcino), canaiolo and mammolino grapes.

Standing majestically at the end of a cypress-tree lined drive just outside the Montepulciano town walls, this church is the masterpiece of Florentine architect Antonio da Sangallo the Elder.

Built of honey-coloured travertine stone, it was constructed in the form of a Greek cross, with a dome and façade flanked by two bell towers (one of which remains unfinished). The project was Sangallo’s focus for the last 15 years of his life, and was one of the most ambitious of its time.

Tales of miracles in Montepulciano span the ages: the Madonna delle Grazie was said to have bled when stabbed by an angry youth in 1514, and bruises were said to have appeared on the remains of the Madonna di San Martino after being hit by an iron chain in 1580. Legend has it that the image of the Virgin appeared on one of San Biagio’s walls on April 23, 1518, opening and closing her eyes.

The Virgin’s appearance is said to have returned over several days, as witnessed by most of the town’s residents (accompanied by healing in many cases). In her honour, the people decided to build a temple around the Virgin, funded with donations from far and wide. The inscription over one of the doors is testament to this project.

The church is dedicated to Saint Biagio (Blaise), an Armenian doctor who became a bishop and renounced worldly comforts in favour of a contemplative life in the mountains. He was later imprisoned on a charge of practising magic, and was tortured with a sharp instrument used to card wool.

His treatment made him the patron saint of carders, which is why he is frequently featured in Tuscan paintings. (The textile industry was at the centre of the region’s medieval wealth.) The saint is also invoked by Italians to remedy sore throats, as he once saved a child choking on a fishbone that had gotten lodged in her throat.