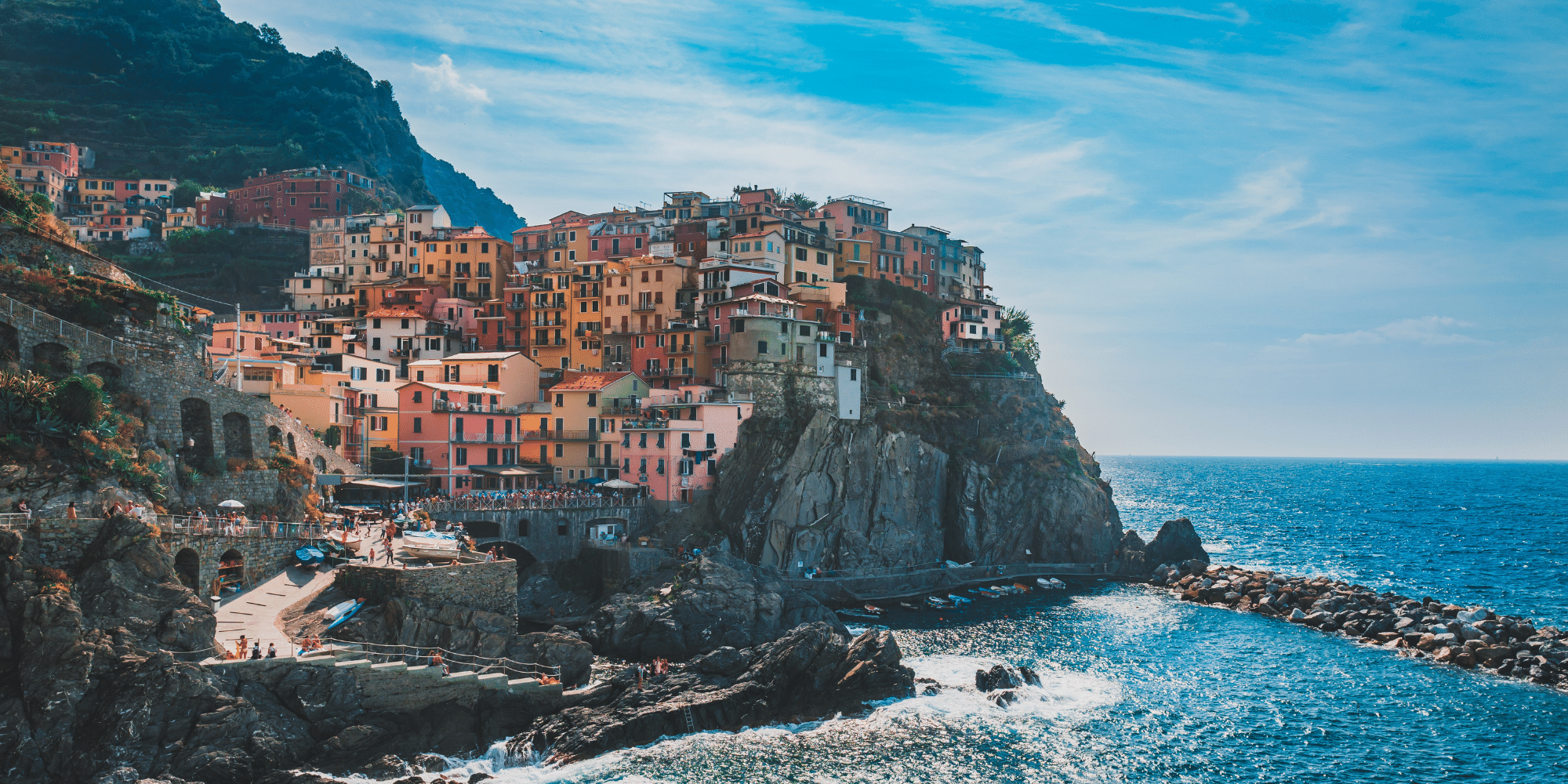 An Insider's Guide to the Cinque Terre

In this post, I’ll provide a brief overview of the highlights in each of the “Big Five” towns, lay out some tips for what to see (and what to avoid), and reveal a hidden gem of a city just outside the Cinque Terre that most tourists would never think to visit.

The “Big Five” of the Cinque Terre

In the 18th century, when the coastline finally became safe from attacks, the townspeople of the high inland villages were able to descend to establish the port of Riomaggiore.

The oldest houses follow the traditional tower-shaped architecture: three or four floors, two rooms on each one. The opening of the railway line has modified the structure and life of the town from its fishing and farming roots, toward tourism.

Some of its noteworthy features are the Church of San Giovanni Battista, the Guardiola Tower and the Centre for Environmental Education and Naturalistic Observation.

Riomaggiore is also the hometown of the Wine Cooperative of the Cinque Terre. The castle, once used as a lookout for Saracen incursions, now offers lodging and facilities for didactic events.

This ancient Roman town huddles atop a headland of dark rock. The church is dedicated to the Nativity, and its bell tower was originally used as a lookout post.

Each August, a ceremony honouring the patron saint is held during a blessing at sea, illuminated by tiny candles. In December, a Nativity scene with 300 life-sized statues (made from recycled materials) attracts visitors from across Italy.

Perched above the water but without access to it, Corniglia atypically lacks a port. As a result, it has long depended solely on agriculture and wine production.

Its urban layout is thus reminiscent of inland villages, with low houses along the main road. Its church, San Pietro, is one of the most interesting Romano-Gothic monuments in the Cinque Terre.

Once known to the Romans as Vulnetia, modern-day Vernazza is probably the most photographed village of the Cinque Terre. The only town with a natural port, it has been in the hands of various Genoese families throughout history. The Fieschi clan was among its best-known possessors.

The town’s past is reflected in its powerful architecture, ancient ramparts, lookout towers and the Castle of Belforte, which surrounds this small town of 1,250 inhabitants. A valuable example of regional architecture is the church of Santa Maria d’Antiochiam, built by Benedetti Antelami in 1318.

During the 11th century, when Monterosso became part of the Republic of Genoa, fortifications were increased to defend the inhabitants from Saracen pirates and rival Pisans. The bulk of the town lies between the modern residential area on the Mesco peninsula and the ancient part, which is still intact.

There you’ll find the Church of San Giovanni Battista and the Aurora Tower (one of three defence towers still standing) among other noteworthy structures. Of particular interest is the Baroque Oratorio della Morte e Orazione, where many residents give their loved ones a final farewell.

Farther on lies the monastery of the Cappuccini, which is connected to the church of San Francesco. The latter houses a depiction of the Crucifixion, a treasured work attributed to Van Dyck.

Fabulousness Outside the Big Five

If you limit yourself to only visiting the big five, be warned: many people think that the above five towns are the only ones they are supposed to see in the region. As a result, you will likely find yourself hiking with lots of other people, as the trails connecting them are usually crawling with tourists.

But don’t forget that these are but a few amongst a whole coast of charming and quaint little villages, which spread for miles and miles.

Rather than spend your precious time ticking the big five off some perfunctory list (and repeating “hello,” “buon giorno,” “bonjour,” and “guten tag” ad nauseum while you’re on the trails) try following the path less travelled.

The higher trails will pass above the towns, passing through more untrodden terrain, vineyards and tiny villages whose names may mean nothing to you, but offer many charms.

Of course, you should see one or two of the big five, though you may not choose any of them for your home base, as there are virtually no high-end hotels in the actual Cinque Terre.

A good idea is to choose to base in Portovenere, an old fishing village with an ancient castle, a beautiful Romanesque church on the high ground with waves crashing below and the pretty island of Palmaria just across the way. Opt for the newly refurbished Grand Hotel Portovenere.

Hiking to the nearest Cinque Terre village of Riomaggiore from here is a bit ambitious, but with a boat – either public or private – you can start with a visit to Riomaggiore and then climb away from the sea and reach one of the smaller villages on the upper trail.

Go the Other Way

From your base in Portovenere, you can also travel away from the Cinque Terre and enjoy more secluded hiking, visiting the charming town of Lerici as well as Tellaro, a small hidden gem that most tourists will never see. Keep in mind that there are always logistics involved and you may need to travel by boat, trains, on foot and even in a taxi to get the best hiking experience along the Ligurian Coast.

There are a few different hiking trails worth visiting in the Cinque Terre National Park. The most trodden is the #2 trail that is the least challenging (although it has plenty of rocky steps up and down).

However, due to the occasional mudslides in the rainy part of the year, parts of the main trail here are often shut down and you have to adapt and take the higher trails or visit certain towns by train or boat.

Currently, the Via dell’Amore (the Lover’s Trail), which is only one kilometre long and lies along a flat cement path connecting Riomaggiore and Manarola, is closed due to some falling rocks. These two towns are so close, and yet to hike between them you have to do a solid one-and-a-half to two hours up and down, versus the usual 15 minutes when the trail is open.

The Park’s Committee takes its responsibilities seriously and won’t open the trail until they feel they can promise a safe passage for all.

In addition, there are always Italian politics slowing everything down. Similarly, trail #2 from Manarola to Corniglia (usually 30 to 45 minutes) is also closed and has been for many years. So there again you must pass up high in the hills to connect these two towns.

Whichever route you choose, decide in advance that you’re not going to hit all five towns of the Cinque Terre. As a result, you’ll see more of the coast and fewer tourists.

Feeling inspired to see and stay for yourself? Get in touch with a member of our team to start planning your perfect escape to Cinque Terre.