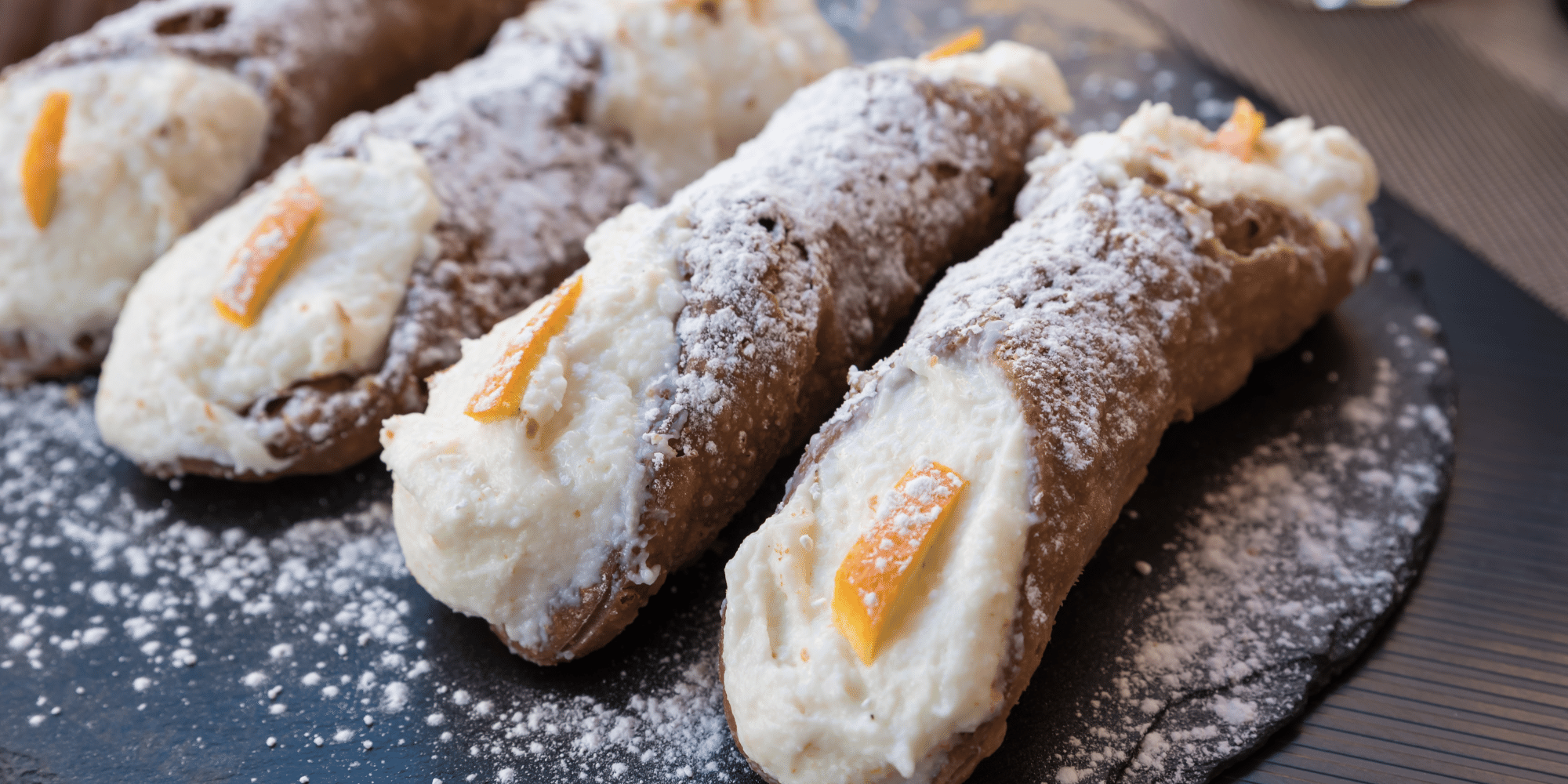 Nowhere else in Italy can claim the rich and varied history that Sicily and its neighbouring islands have endured.

They were invaded by such powerful civilizations as the Greeks, Romans, Arabs, French and Spanish, all of whom left their lasting mark on Sicilian cuisine. To try to characterize the island’s food is almost impossible, as it varies completely from the east to the centre to the west, and then, within those areas, from town to town.

However, the one characteristic that links all of Sicily’s cuisine is that it is always a blend. No other group has so skilfully absorbed the best aspects of every conquering culture and then turned that into a cultural strength as the Sicilians have. This dynamic characterizes its cuisine, which is simply a creative medley of the best flavours to pass through the island.

Sicily’s climate and fertile soil make growing any crop very easy. Its main production is wheat, which dates back to the Romans who chopped down Sicily’s remaining forests to make it Rome’s granary. The region now produces 10 percent of all of Italy’s wheat supply, much of which is used on the island itself to make the delicious breads and diverse pastas.

The pasta sauces are made with a variety of ingredients; the base is usually tomato or seafood, enriched with the Arab influences of currants, dates, pine nuts or saffron or, in the Greek style, with olives and capers. Wild fennel, celery, rosemary and other herbs from the wild macchia scrub also add their distinct tang.

The sea naturally produces the base of the Sicilian kitchen—seafood. The types are endless, but swordfish is the most common, followed by tuna, octopus and bonito, tuna’s smaller cousin. These are prepared in a variety of ways, often pounded into a flat fillet and wrapped around a stuffing of breadcrumbs and herbs, called involtini.

The famous Sicilian cheeses are credited to the Romans, and they are particularly known for their fresh ricotta. Unlike the North American cow’s-milk variety, Sicilian ricotta is made fresh with goat’s milk and is aged to make the sharp pecorino. Another popular cheese is caciocavallo, made from cow’s milk into little balls that are often found hanging in shop windows. This variety can also be smoked to give it a hardier flavour.

The Arabian Influence—Both Sour and Sweet

The Arabs brought to Sicily their groves, namely almond, orange and lemon. Next to wheat, citrus fruit is Sicily’s strongest crop; more is grown here than in any other region in Italy, and 90 percent of the country’s lemons come from Sicily.

Every other type of citrus fruit is also grown here: oranges, blood oranges, bitter oranges, tangerines, limes, citrons and grapefruit. Legend says that in the 11th century a prince from Salerno presented a Duke of Normandy with a Sicilian orange, which was so perfect that it instigated the French interest in conquering this fertile land.

The Arabs also left the Sicilians with an incurable sweet tooth—one might say too sweet. Even the greatest sugar lover risks finding Sicilian desserts too much. The quintessential Sicilian sweet is the beautiful marzipan known as Frutta di Martorana, made of sugar and almond paste and painted to perfectly resemble different fruits.

They are often so beautiful it is hard to imagine eating them. This candy originated in a convent outside of Palermo, where the nuns created the fake fruit to hang on the trees in their garden to impress a visiting bishop.

Other famous desserts include cassata, a ricotta-based cheesecake (the Catanian variety is known irreverently as cassateddi di sant’Aita and shaped like the saint’s martyred breasts), and cannoli, little pastry shells filled with sweetened ricotta cheese. The Sicilians also love nougat, called torrone, which is usually flavoured with almonds and traces its origins to a sort of Roman legionnaire’s power bar.

There’s also zabaglione, a foamy cream made from Marsala wine, eggs and sugar. The best time to enjoy these treats is during any festival, as sweets play an integral role in the traditions of all holidays.