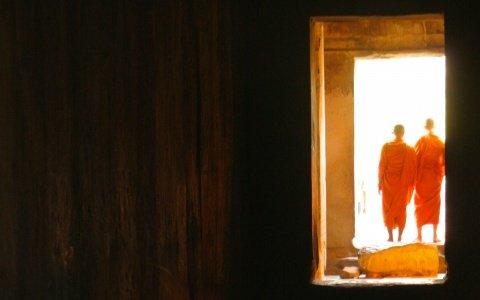 Buddhism in Vietnam: An Education in Enlightenment

The Vietnamese people are among the warmest, friendliest and most gracious we’ve ever encountered. It’s likely not a coincidence that more than half the country practices Buddhism, a religion focused on enlightenment.

Buddhism is one of the four primary religions and philosophies that shape the spiritual life of the Vietnamese people. (The others are: Confucianism, Taoism and Christianity.) A fifth religion takes elements from each of the three Eastern religions and fuses them with popular Chinese beliefs and ancient Vietnamese animism to form what is known collectively as tam giáo, or “triple religion.”

It’s estimated that more than 60 per cent of Vietnamese people practice some form of Buddhism, and both of its two main schools—Mahayana and Theravada—are represented. Mahayana, or “Great Vehicle,” predominates due to the powerful historical influence of the Chinese. It was introduced in northern Vietnam during the 3rd century A.D.

The fundamental difference between the two schools of Buddhism is that Mahayana Buddhists work toward the enlightenment and salvation of all sentient beings, while Theravada Buddhists believe in a personal quest for enlightenment. Theravada Buddhists claim to adhere to the original teachings of Siddhārtha Gautama, while Mahayanists claim to have expanded on these teachings for the greater good, and consider Gautama only one of the innumerable manifestations of the Ultimate Buddha.

These countless Buddhas and Bodhisattvas gave rise to the plethora of deities whose aid can be sought through invocations and offerings. Bodhisattva is the name the Mahayanas give to those who have renounced their chance at Nirvana and have instead returned to Earth to help all beings reach enlightenment.

Theravada, or “Tradition of the Elders,” is considered by some to be a purer form of Buddhism. It travelled to Vietnam about 100 years earlier than Mahayana, by way of the south, along Indian trade routes through Siam and Myanmar. Today, it exists only in small pockets of the Mekong Delta.

The ultimate goal of Buddhism is the cessation of suffering and the attainment of Nirvana. Nirvana can be achieved through a lifetime of strict adherence to the Eightfold Path, also known as the Middle Path, because it steers a course between materialism and asceticism. The Path is gleaned from the teachings of Siddhārtha Gautama, the founder of Buddhism. Many Buddhists believe they inherit bad karma from previous lives, and ridding oneself of bad karma is accomplished by performing good deeds. Karma is based on a simple system of cause and effect: good deeds have good effects, and bad deeds have bad effects.

What You’ll See at Buddhist Temples

Here’s some background information to help you better understand the layout of typical Mahayana Buddhist temples and pagodas. Outside the pagoda, you’ll often find Guan Yin (the Goddess of Mercy), a white statue representing fertility and mercy. A variation of Guan Yin shows her with multiple arms and sometimes multiple eyes and ears, permitting her to touch, see and hear all. Inside the main sanctuary are representations of the three Buddhas: A Di Da (Buddha of the Past, pronounced “Ah-zee-dah”), Thich Ca Mau Ni (The Historical Buddha, the representation of Siddhārtha Gautama) and Di Lac (Buddha of the Future, pronounced “Zee-lock”). Nearby are often statues of the eight Kim Cang (Genies of the Cardinal Directions), various other Bodhisattvas and an altar for funerary tablets memorializing deceased Buddhist monks and lay people.