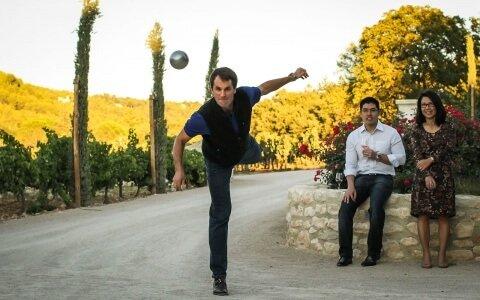 With a languid pace perfectly representative of life in Provence, the game of boules, also known as pétanque, is quintessentially Provençal.

The game became prominent during the First Empire (1804–15) and has since become widespread in the region. Generally, it is played by two or three pairs of players. One team starts by throwing a little wooden ball called le cochonnet (the little pig) about 20 feet. Each player then tries to throw his/her boule as close as possible to the cochonnet.

If one competing team throws a ball close to the cochonnet, the second team tries to shoot (or tirer) the other ball away. The masterstroke is when you’re able to shoot away the enemy ball while having yours take its place. This is called carreau, or square.

The team that can get its boule closest to the cochonnet wins. The score is then calculated by how close the other boules are. For example, if the red team wins but the next-closest boule belongs to the blue team, then the red team scores just one point. On the other hand, if red team also has the second- and third-closest boules, then it scores three points. The first team to reach 11 points wins.

At the turn of the 20th century the game permitted players to take three steps before throwing. But a famous player known as Jules “the Black” Hughes threw the boule without moving his feet. His pieds (feet) tanke (grounded) gave birth to the game’s alternate name, pétanque.

Every respected “Boulodrome” has a splendid carving or picture of a woman’s bottom hanging somewhere on the wall. This is not decoration, nor is it a tribute to feminine beauty. Rather, it is a long-standing tradition in boules. Should a team lose without scoring a single point, they must kiss “La Fanny”!

The tradition started in the north of Provence in a town called Les Voges. Fanny was the name of a waitress at the bar “Café de Grand-Lemps.” This kind-hearted soul promised, as a consolation prize to the non-scoring loser, a kiss on the cheek. One day the mayor of the little town happened to get skunked in a game, and he came over to Fanny expecting his prize. But Fanny, who wasn’t on such good terms with the mayor, presented her other cheek instead! The mayor, who obviously had a sense of humour, kissed both her “cheeks”—and thus a tradition was born. So, should you play boules, be sure to score at least one point! Otherwise… well, now you know the story.