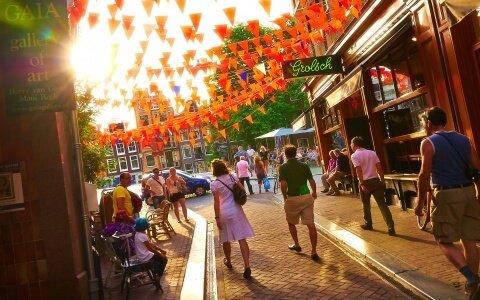 Insider's Guide: 18 Other Things To Do in Amsterdam

Must Sees | Europe | By Lewis Evans

We all know that Amsterdam has developed a certain… reputation, let’s say. But don’t let that fool you. Recently named one of the world’s best cities to bike through, we’ve long had a love affair with this Dutch gem.

Quirky and modern yet rich with history, the largest city and capital of the Netherlands blends impressive architecture with creative cuisine, stunning art and cosmopolitan flair. Below, find a few other things to do in Amsterdam that should prove almost as enlightening.

18 Things to Do in Amsterdam

(That Would Also Be Legal Back Home)

Taking a canal cruise is perhaps the best way to get a taste of Amsterdam’s rich and colourful past. Several operators leave from the Central Station, the Damrak, the Rokin and the area near the Rijksmuseum. The cruise takes about an hour.

An alternative to regular canal tours is the Museum Lovers’ Boat, which offers a cruise with free-flow visits to six of the more important museums of Amsterdam. This boat leaves every 30-45 minutes from the Prins Hendrikkade opposite the Central Station.

But if you want to really get to know Amsterdam, you need explore the town on foot. To make good use of your time, you might also want to take advantage of Amsterdam’s elaborate tramway system. The concierge in your hotel can explain how to use the strippenkaart, or Dutch ticket system.

A good place to start exploring Amsterdam is Dam Square—the exact spot of the original dam in the Amstel River. Here you will find the national monument to commemorate victims of World War II.

Just off Dam Square in the direction of the Central Station is the Beurs van Berlage. The style of this building may look familiar to Americans, as its influence comes from the late 19thC architecture of Chicago and New York.

On the west side of the dam you’ll find the Royal Palace, which was originally built as Amsterdam’s city hall. The power and wealth of the city is evident in the splendour and sheer size of the building. The royal family has occupied the building as a palace since the foundation of the monarchy in 1813. The nearby crowded pedestrian shopping street, Kalverstraat, will lead you southwards to the Begijnhof, which boasts the oldest house in Amsterdam (1460).

The east side of the dam gives out to the Red Light District. Amid the sleaze in this former heart of early Amsterdam, you will discover architectural marvels, such as the gothic Oude Kerk.

The Museum Amstelkring is also worth a visit. On the top floor of two connected canal houses you will find a hidden Catholic church known as Ons Lieve Heer op Solder (Our Lord in the Attic). Walking along the Zeedijk, you’ll arrive at the Nieuwmarkt. Here, you are on the edge of the medieval city. If you follow the St. Antonies Breestraat eastward you will arrive at the Museum Het Rembrandthuis. The former private residence of this great painter is dedicated to his life and work. The Rembrandthuis is located in what was, before the war, Jewish Amsterdam.

The nearby Joods Historisch Museum is housed in a complex of four 17th and 18thC synagogues. Here, the rich history of the Dutch Jewish community is documented in an impressive exhibit.

Southern Amsterdam contains a large number of cultural institutions. The Rijksmuseum houses the world’s greatest collection of 17thC Dutch paintings—don’t miss Rembrandt’s Night Watch. The Vincent van Gogh Museum also contains work by his contemporaries. Further down the road, the Stedelijk Museum concentrates on modern art from 1850 onwards. The Concert Hall is located on the south side of the Museumplein. This side of the square lends itself to Amsterdam’s more chic shopping streets. Last but not least, just outside the canal ring is the Heineken Brewery. A tour of the once-time Heineken brewery (from 1932 until 1988) is a must for beer fans!

Anne Frank and her family spent 25 long months living here during the Second World War. The attic has not been significantly altered since that time, and downstairs you will find a small museum documenting the events of the Holocaust; a very moving experience.

On the north side of the Begijnhof, The Amsterdam Historisch Museum is a must if you want to delve deeper into the city’s past. From here, it’s time to start wandering along the canals. Take one of the side streets toward the canal belt and make your way to the Herengracht. The Bijbels Museum is well worth a visit, not only for its Bible exhibitions, but also its location in two canal houses dating back to 1662.

Any of the following markets are fun to stroll through. Ask your hotel concierge for directions:

De 9 Straatjes (The Nine Streets): In the heart of the Canal District, a short walk from Dam Square, you’ll find this wonderful small shopping district. Located in between The Singel and Prinsengracht, you’ll find nine picturesque streets of historical buildings with unique boutiques, antiques, gifts shops, cozy bars, restaurants and cafes where you can lounge once you have finished your stroll.

Bloemenmark: This is the daily floating flower market, located along Singel Canal at Muntplein.

Waterlooplein Flea Market: In between all the museums, visit this lively market. You can find almost anything for a price! Try frites met mayonnaise, a Dutch specialty. Open Monday to Saturday, 9:00am to 4:00pm.

Albert Cuyp Market: This is a general market, open Monday through Saturday.