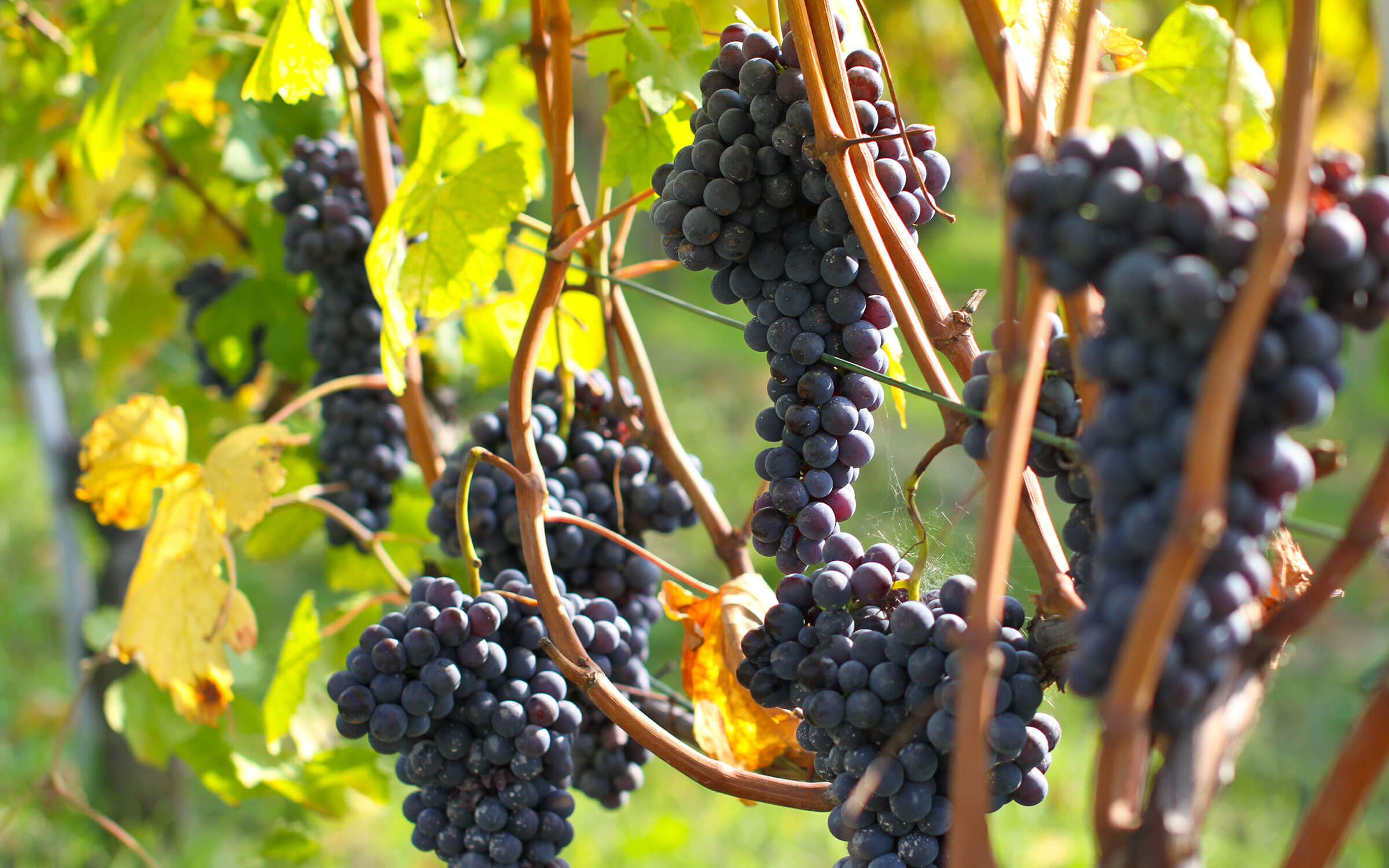 Recently, there has been a trend towards more specific cru labelling: for instance, Gaja’s famous Barbaresco Sorì Tildin and the great Barolo Rocche (dell’Annunziata). Slow Food Editor’s A Wine Atlas of the Langhe offers a superb and beautifully illustrated guide to the Barolo and Barbaresco crus.

Check out this diagram to help make sense of all of these wine names—especially Barolo, Barbaresco and Barbera.

Depending upon where and how it is grown and aged, this famous native Piemontese grape can be made into Langhe Nebbiolo DOC, Roero DOCG, Nebbiolo d’Alba DOC, Barbaresco DOCG or Barolo DOCG wines.

Probably named for the nebbia, or fog that comes at harvest time, this is the first varietal to send offshoots in the spring and the last to be harvested in the fall, (sometimes as late as November). The Nebbiolo grape is high in tannins, sugars, polyphenols and acid, and has a trademark garnet colour with hints of brick or orange, even when young. Its nose and flavour can be a rich swirl of tobacco, leather, spices, licorice, berries, chocolate or mushrooms, though the Nebbiolo d’Alba has a softer bouquet that often hints of violet. Its balance makes this a superb wine for ageing, though recent winemaking trends make it drinkable even soon after release.

“The king of wines and the wine of kings,” Barolo is a wine with infinite complexity, one of the strongest and most distinctive wines available. With age, the wine turns to a brick colour, revealing a rich palate of dark fruits such as cherry and blackberry as well as more earthy tones such as truffle, mushroom, leather and tobacco. While more structured and imposing, Barolo is also more “masculine” and austere than Barbaresco and varies more, since it can be grown in the towns of Barolo, Castiglione Falletto, Cherasco, Diano d’Alba, Grinzane Cavour, La Morra, Monforte d’Alba, Novello, Roddi, Serralunga d’Alba and Verduno. By law, it must be aged at least three years before release, though many producers age it longer.

For passionate Barolo fans, it may seem a travesty to transform this potent Piemonte wine into an herbal apéritif, but since its invention in Serralunga d’Alba in the 1870s this concoction has evolved from a medicine to a favourite aperitivo. Made with quinine and a long list of secret herbs and spices, then sweetened, it’s also fantastic paired with dark chocolate.

With about half the annual production of its big brother Barolo, Barbaresco is grown in only the best expositions in the towns of Treiso, San Rocco Seno d’Elvio, Neive and Barbaresco. The resulting wine is often a masterpiece of finesse and refinement, more “feminine” yet still muscular enough to accompany meat dishes. Barbarescos must be aged at least two years (in a large wooden cask, oak barrel or bottle) and Barbaresco riservas aged four years before release.

Deep ruby-red, Barbera d’Alba and Barbera d’Asti DOC wines must be aged for at least one year, helping to attenuate its strong tannins. Its full nose often recalls red fruits or berries and spices, and its flavour is dry and austere with strong acidity. Its cranberry-like fruity flavour and balanced tannins make it a great match for richer regional dishes.

The province of Asti produces one of the world’s most famous Moscato wines, made sparkling with the Charmat (tank) method. Registered as a DOCG since 1993, the wine’s reputation has waxed and waned over the years, but at its best, this sparkler is memorably full of ripe fruit and is incomparably refreshing.

Usually served in a white wine glass, Moscato d’Asti is made from the same varietal as Asti Spumante. Carefully produced in smaller quantities, it is also less sparkling than Asti Spumante and is best consumed fresh.

The Roero hills to the south of the Tanaro River are known for this white wine, whose name likely means “rascal.” The Arneis is an elegant white wine with ageing potential, straw-yellow with occasional green tones, and dry with pear, apple or apricot notes. In recognition of its increasing quality, the appellation was awarded an upgrade from DOC to DOCG status in 2006.

Produced in the Apennine hills around the eponymous town, Gavi is made from the Cortese grape and is pale straw-yellow, crisp and dry, light-bodied and more mineral than fruity, with a fine perfume.

Both a wine grape and table grape, this varietal is sometimes called furmentìn and is grown in both the Roero and Langhe hills. Recent DNA evidence shows it may be the same grape as Vermentino. This Piemonte wine is straw-yellow with fruity and herbal notes, and at its best is full, dry and harmonious.