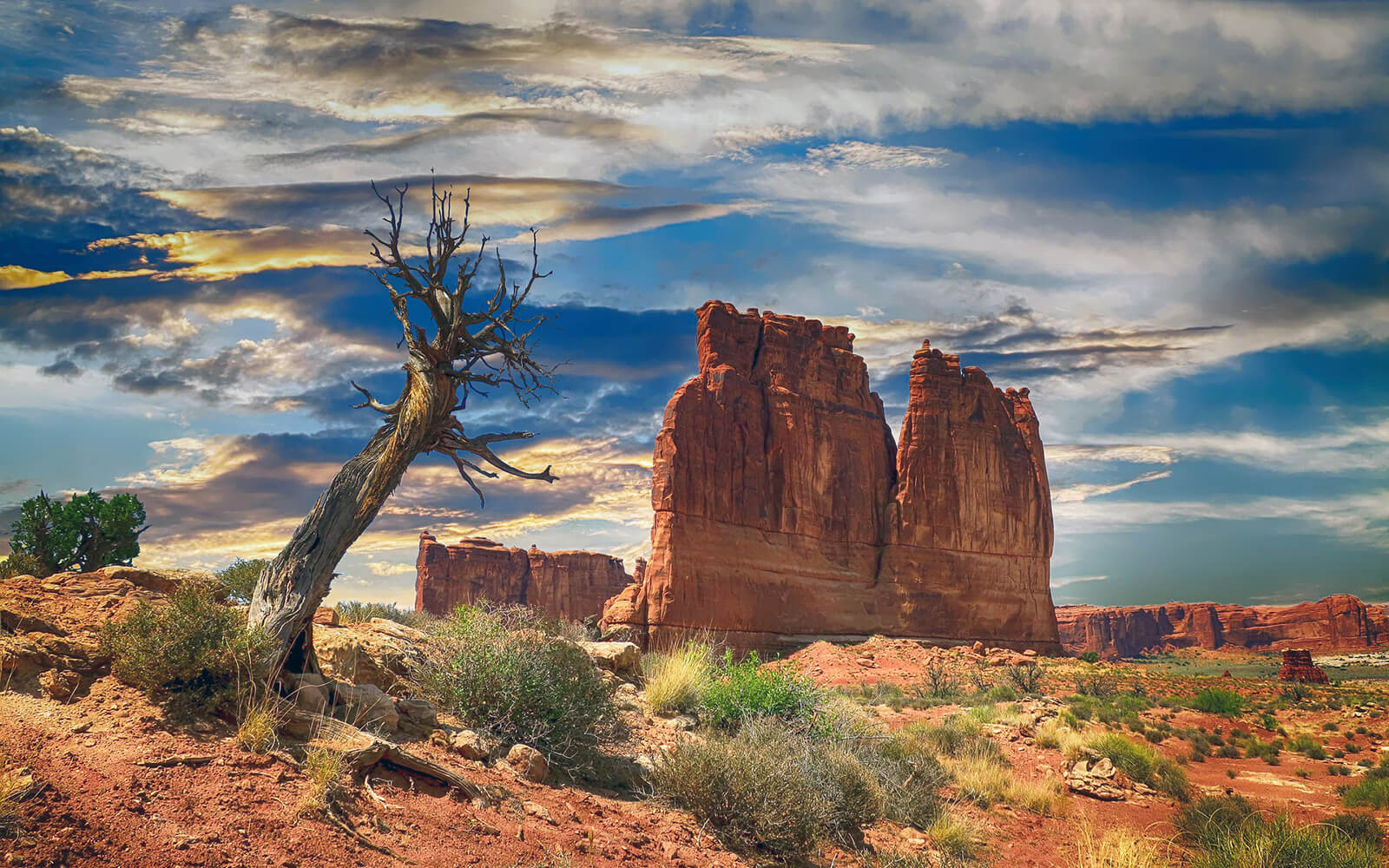 Blessed with endless skies and carved by eons of simply letting Mother Nature do her thing, Utah is a geological wonder, a true beauty—and a photographer’s dream. The Beehive State is where you’ll find the most astonishing formations with just-as-funny names: hoodoos, buttes, badlands, mesas, and more.

From deep canyons to soaring arches, flat-topped rocks and mazelike ravines, gullies, pinnacles and peaks, here’s a quick look at some of the state’s most spectacular spots to tag #mybnr!

Home to the world’s largest concentration of natural sandstone arches, this national park covers 76,518 acres of land; its most well-known feature is the Delicate Arch. Formed from Entrada sandstone from the Jurassic period, the freestanding arch reaches a height of 18 metres (60 feet). Perhaps the most recognizable image of Utah, it’s featured on the state’s stamps and license plates. Close to the Delicate Arch hiking trail, Ute Indian petroglyphs imprinted into the stone can be found, an important mark of past Native American peoples from the 17th through the 19thC.  Also noteworthy is the Landscape Arch, which measures 93 metres (306 feet) across, making it one of the longest natural arches in the world. Alongside its arches are other varying rock formations and shapes including balanced boulders, darting pinnacles and sandstone towers known by colourful names such as The Organ, Tower of Babel and the Three Gossips.

The colourful and impressive Canyonlands National Park, signed into existence by President Lyndon Johnson in 1964, is filled with the carved-out shapes of endless canyons, buttes and mesas as the Colorado River shaped it over time. With four distinctively named districts, you can find yourself exploring the ‘Island in the Sky’, the Needles, the Maze, or the combined rivers of Green River and Colorado River. The desert atmosphere and spectacular formations mean that no matter where you explore, this utterly fantastic landscape will leave you forever changed. American author Edward Abbey, who once worked as a seasonal ranger in Utah, called this spot “the most weird, wonderful, magical place on earth” and you’re sure to agree.

The most popular district for visitors is the Island in the Sky mesa, where you can peer on sandstone cliffs more than 304 metres (1,000 feet) above the surrounding terrain. The second most-visited is the Needles district, characterized by sandstone spires, striated with various colours of rock. The Maze is the least accessible district of the park, extremely remote and with difficult roads and trails. In the Rivers district, above the Confluence, you will find people kayaking, canoeing or rafting in the calm waters; below the Confluence, where both rivers combine, is where world-class whitewater can be found for the experienced and adventurous.

Capitol Reef National Park is defined by the Waterpocket Fold, a warp in the earth’s crust, likely caused by colliding continental plates (the same ones that created the Rocky Mountains). It is a rocky spine stretching for almost 160 kilometres (100 miles) from Thousand Lakes Mountain to Lake Powell, accompanied by rich red canyons, buttes and monoliths. The Fremont people first occupied the land around 500 CE and their legacy can be discovered etched in stone with Petroglyphs and painted pictographs. In the 1800s, explorers and Mormon pioneers arrived, bringing with them their skill for farming, they planted apple, pear and peach trees, resulting in what is now the Fruita Rural Historic District, a former community whose orchards still remain.

Despite its name, Bryce Canyon’s most famous feature is not a canyon at all, rather a naturally formed amphitheatre of red, white and orange hoodoos—rock pillars formed by frost weathering and erosion caused by streams and rivers—on the Paunsaugunt Plateau. While you will find hoodoos on every continent, Bryce has the largest number in the world. Early beginnings of human activity on the plateau remains a bit of a mystery to archaeologists, although artifacts from the Ancestral Pueblo and Fremont people from around the 12thC have been discovered. European Americans attempted to explore the region in the 18th and 19th centuries, however, it was difficult to reach. It was surveyed and mapped by John Wesley Powell in 1872, who kept many of its Paiute place names intact.

Covering 5,362 acres and with a high-desert altitude of 1,800 meters (5,900 feet) above the Colorado River, the vantage point from Dead Horse Point allows for expansive vistas of the surrounding and ever-changing, landscape. Dead Horse Point is said to have received its name from cowboys who would corral wild mustangs to the narrow neck of land onto the point, choosing the ones they wanted, and leaving others behind. (At one time, for an unknown reason, some of the horses were left trapped on the point and they died of exposure). The park is defined by its weaving canyons and rock layers shaped by over millions of years of erosion from lakes, streams, wind and ancient oceans. Moviegoers will also recognize Dead Horse Point, standing in for the Grand Canyon in the final scenes of the movie Thelma and Louise.

The Grand Staircase-Escalante was declared a national monument in 1996. Although its designation is only a few decades old, the site dates back over 80 million years, based upon the excavation of numerous dinosaur fossils in the area. New species have been continued to be discovered as recently as 2013.

Millions of years after the dinosaurs roamed the land, the Fremont people hunted and gathered in the plateau and Escalante Valley and the ancestral Puebloans farmed in the canyons. Their traces can be found through the site through rock art and ruins. Non-native settlers arrived in 1866 led by Captain James Andrus, followed by John Wesley Powell on his second expedition. The Mormon settlers of the San Juan Expedition passed through in 1879 but decided to continue on due to unfavourable conditions for permanent living. Relatively undiscovered, the monument was the last place in the continental United States to be mapped.

The monument is divided into three distinct sections: the Grand Staircase, the Kaiparowits Plateau, and the Canyons of the Escalante. A biological wonder, it spans five types of life zones ranging from low desert to coniferous forest.

Straddling the border of Utah and Arizona in the Colorado Plateau, Monument Valley is emblematic as the home of the American cowboy: its immense buttes were often used as a backdrop for John Ford’s iconic Western films such as My Darling Clementine (1946) and She Wore a Yellow Ribbon (1949). The valley is accessed via a weaving 28-kilometre (17-mile) road known as Valley Drive, from where its most famous buttes, the East and West Mittens, can be seen looming in the distance.

The ancestral Puebloans were the first to settle here in 1200 BCE and remnants of their art and constructions can still be seen throughout the desert valley. Centuries before Spanish explorers arrived in 1581, Monument Valley was and remains home of the Navajo people.

First established in 1919, Utah’s very first national park was first inhabited 12,000 years ago by hunter-gatherers who tracked giant sloth, mammoth and camel across the lands. This gave way to the Virgin Anasazi culture of 500 BCE, who first began to farm on the plateau, growing corn and other crops using the river as their water resource. The Anasazi built villages, pueblos, the ruins of which can still be seen in the park today.

The Anasazi people journeyed southeast, likely due to drought, and were replaced by the Paiute people (indigenous people of the Great Basin) and then by Mormon pioneers in the 1860s. Zion was also included on John Wesley Powell’s scientific exploration of Southern Utah in 1872.  Zion National Park is celebrated for its narrow slot canyon, home to an abundance of flora and fauna, which runs for 24 kilometres (15 miles) through salmon-coloured Navajo sandstone cliffs.