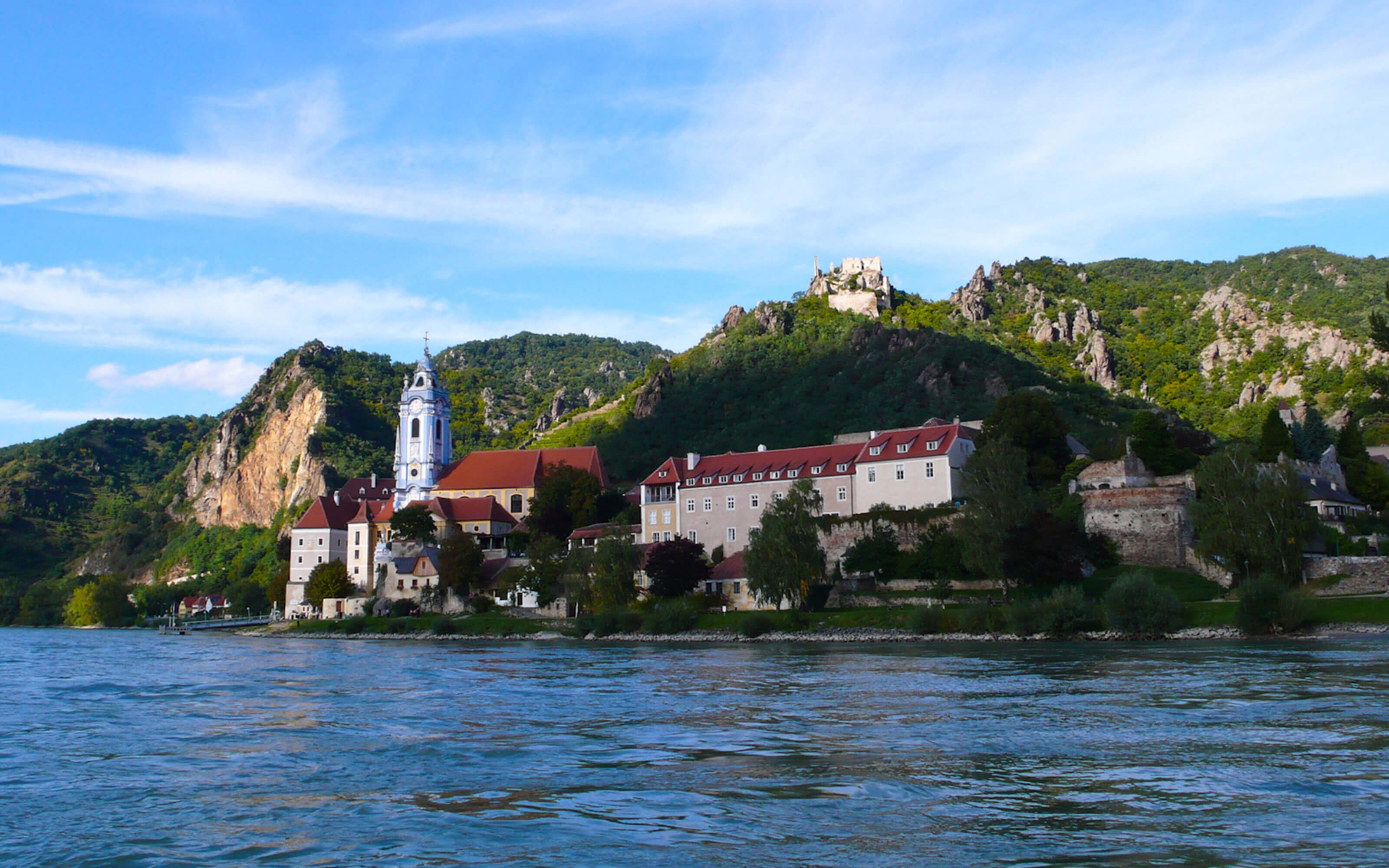 Situated among Austria’s most famous vines, Dürnstein, known as the “Pearl of the Wachau,” is not only one of the country’s most beautiful small towns, but also boasts some of its most storied history.

Certainly, the blue baroque church spire that greets visitors from either direction is quite exceptional. There are several spots in town worth visiting, among them the 15thC former Augustine monastery—splendidly redone in the baroque style in the 18th century—and the adjoining parish church, which contains works by Kremser Schmidt and must hold some kind of record for cherubs per square foot.

Visitors should be sure to see the ruins of St. Kunigunigunde Church, along with the charnel house (both 14th century) located in the old graveyard in the upper part of town—a testament to the town’s long history.

Richard the Lionheart in Dürnstein

In 1188, the Third Crusade began. Frederick I Barbarossa, the Holy Roman Emperor, kept a promise that he had given to the Pope, and together with the Christian Army he marched toward Jerusalem in order to recapture the city from Saladin. Also taking part in this crusade were Philip II of France, Richard I of England (“Richard the Lionheart”) and Leopold V, Duke of Austria.

Frederick, who was nearly 70 years old at the time, died on his way to Jerusalem; serious quarrels then broke out among the other leaders. Among other disagreements, Leopold was sure he had been cheated out of his bounty by Richard. In addition, Richard had torn down the erected Austrian flag, seriously offending the duke and prompting him to head back to Austria.

On his way home from the crusade in December, 1192, Richard was shipwrecked near the Italian coast. He tried to return to England via Germany; at Erdberg, then a little village near Vienna, he was recognized when his servant wanted to pay with a striking Byzantine coin. Leopold had Richard captured and handed him over to his reliable vassal, a Kuenringer, who put him into confinement at Dürnstein (specifically, the castle whose ruins overlook the town today).

The royal prisoner was allowed to receive travelling singers, or troubadours, which may explain why the legend of the troubadour (sänger) Blondel came into existence much later. In March, 1193, Leopold handed his prisoner over to Emperor Henry VI (Barbarossa’s son), who demanded 150,000 marks in silver as ransom for Richard’s release—a sum that indebted the English population and brought prosperity to Vienna. The first part of the money having been paid, Richard was allowed to return to England in March, 1194. The duke received 50,000 marks as ransom.

The Legend of Blondel

Romantic legend has it that Richard’s servant, Blondel, had looked in vain for his master in many countries. He travelled from castle to castle, singing in front of each of them a stanza of a song that was only known to his king. Having finally arrived at Dürnstein, he apparently sang his song and heard, in response, its second stanza. It was thus that he found his master.

For those looking to test their cardiovascular health while taking in a gorgeous view, a wonderful addition to any visit to Dürnstein is a hike up to the ruins of Kuenringerburg, where Richard was imprisoned in 1193. As you work your way up the 20-minute climb to the ruins, which affords a tremendous look over the Wachau, you might find it hard to believe that Blondel could emit anything other than heavy breathing upon reaching the top.

Just before Dürnstein, a roadside memorial marks a pivotal, though historically indecisive defeat of Napoleon I of France by a combined Russian and Austrian army. The battle came about by chance, as advancing French troops accidentally ran into the Austrian/Russian army, neither side aware that the other was advancing on the same river bank. The result was a rare defeat for Napoleon, with losses of about 5,000 troops on each side. The mortal remains of thousands of these men—literally heaps of bones—may be contemplated in a crypt in the Dürnstein cemetery. The battle is cited in both Tolstoy’s War and Peace and Clausewitz’s On War, as a rare example of a battle that neither side had any possibility of evading.

Back to The Slow Road Blog
Photography credit: Spire photo jay8085 via Flickr/CC BY 2.0
Blondel photo via Wikimedia